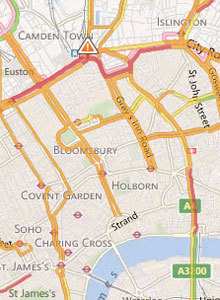 In February, Microsoft announced that it would unify the design of its Bing Maps service with that of Nokia's Nokia Maps. Today, Nokia announced via its official blog that Bing Maps now uses two more services provided by Nokia Maps. One of those features adds more detailed traffic information to Bing Maps in 24 countries, including the US.

People in nearly all these countries will also be able to find out about incidents that might disrupt their journeys. Also, the traffic information in the US that was already available on Bing Maps now includes side streets.

In addition to the traffic information, Bing Maps now uses Nokia Maps geocoding. This should provide more accurate directions for Bing Maps users in a number of countries. The blog hints that Nokia Maps will add even more features to Bing Maps for Windows Phone devices in the near future.

In a previous Nokia blog post, the company went into more detail on its location and mapping efforts. Nokia calls it the "‘Where Platform" and says that it " ... offers compelling, market-leading functionality to app developers via a set of APIs to help them quickly and easily create their own app experiences with location-based functionality."