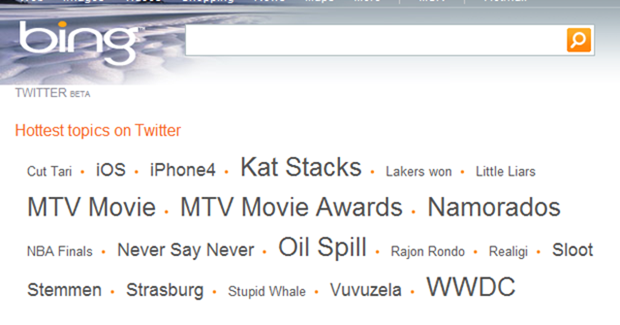 Bing is still hard at work, after a year of being online, to output new features to make it competitive against Google.  Techflash included a video of Bing demonstrating the social search demo, including Twitter and now Facebook links.

Bing has been experimenting with Twitter on its social search for some time now, but is ready to include popular shared Facebook links to its social search.  Bing will include links from your Facebook page, but will not attach any user data to the post, maintaining your privacy.

Yusuf Mehdi, a senior vice president at Bing, said that the social search beta, including Twitter and Facebook, is set to go live sometime this morning.  The Twitter social search beta began rolling out in April.

The current Twitter integration searches for the most recent tweets about current events and trends.  The Facebook integration is expected to perform the same style of link searching as the Twitter beta does, gathering the most popular or relevant topic to your search query.