Microsoft may be ready to issue a beta of Internet Explorer 9 if hints in a recent hotfix are anything to go by.

The software giant issued a Windows 7 update on Tuesday "to support features in Internet Explorer 9 Beta". The update (KB2120976) resolves some streaming issues that relate to Media Foundation in Windows 7. Microsoft has released two developer preview versions of Internet Explorer 9 so far, both without a full user interface. Microsoft has promised new developer previews every eight weeks, the last preview version was released on May 5.

Microsoft is also planning broader support for HTML5 in Internet Explorer 9 through its new script engine. Neowin has reached out to Microsoft officials for comments on the hotfix but at the time of writing we have not received a response.

Update: Microsoft has responded indicating that the wording was a mistake. The hotfix wording now states the patch is for an "upcoming release of an Internet Explorer 9 platform preview build". According to sources familiar with Microsoft's IE9 plans, the software giant will be issuing a beta release in August.

Thanks to Imran Hussain for the news tip 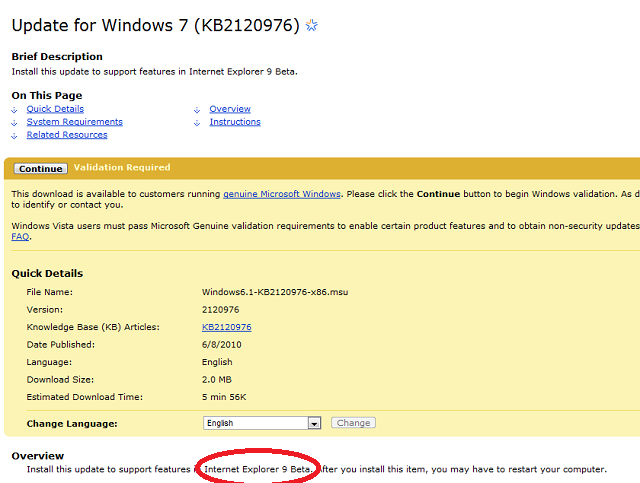