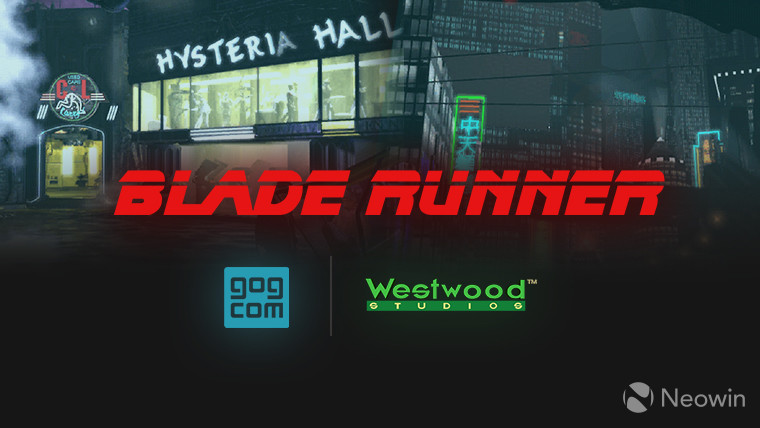 Blade Runner, one of Westwood Studios' long lost point-and-click adventures is now at long last available digitally via DRM-free store GOG, by way of publisher Alcon Interactive Group, and ScummVM. To better understand why this game is what it is, and why it's called what it's called, a bit of background is needed.

The game gets its name from the eponymous 1982 movie directed by Ridley Scott, which is loosely based on Phillip K. Dick's 1968 novel Do Androids Dream of Electric Sheep? - retitled Blade Runner in subsequent editions. The creation of a game based on this IP was floated around for quite a while, with The Blade Runner Partnership - which owned the ancillary rights to the franchise and was the bond guarantor when the original movie went over budget and over time - pitching the idea to Electronic Arts, Sierra, and even Activision.

In the end, the project was taken on by Virgin Games, the game publishing arm of British conglomerate Virgin Group. It had purchased Westwood Studios in 1992, and tasked the developer with creating a game in this sci-fi universe.

Because of copyright issues related to the original film, Westwood was unable to use either footage or anything from the film's soundtrack, though it was allowed to recreate the likeness of the actors that appeared in the motion picture. Due to this fact, the game itself is a so-called sidequel, meaning it tells a story that is parallel with the plot of the film, on rare occasions also intersecting it. Set in 2019 Los Angeles, it follows the story of detective Ray McCoy. He is tasked with finding a group of bioengineered androids designed to look like humans, androids which are dubbed replicants.

The aesthetic of the game was based on samples of the concept art sent to the developer by Syd Mead himself, the "visual futurist" and originator of the overall look of Ridley Scott's movie. Played from a third-person perspective, it was one of the first games to use 3D character rendering as well as to have a world which progressed in real time, without needing input from the player. Unlike a fair few of the titles at the time, Blade Runner did not use polygon-based renderers or 3D accelerators, instead opting for a software-based renderer using voxels. Here is the game's intro, for those curious:

The appearance of this game is a surprise, even though it was teased back at the beginning of December, in the GOG Galaxy 2.0 open beta trailer. As it so happens, GOG sister company CD Projekt RED is working on a no doubt Blade Runner-inspired game of its own - for which it recently showed a glimpse of the soundtrack - but until that one is out, you can get Westwood's point-and-click adventure for 10% off for the remainder of the Winter Sale, and check out the more in-depth look at it here.