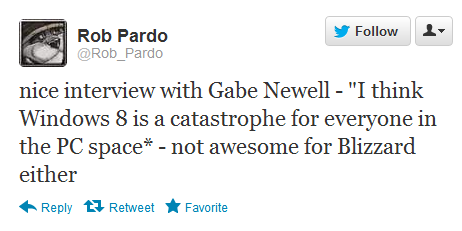 The Internet pretty much blew up when quotes from Valve's Gabe Newell got revealed to the public regarding Windows 8. Newell, speaking at a game conference in Seattle, slammed Microsoft's Windows 8, calling it "a catastrophe for everyone in the PC space."

It looks like another powerful person in the PC gaming space is also not a fan of Windows 8. Rob Pardo, the Executive Vice President at Blizzard Entertainment, used his Twitter page to state:

Pardo was the lead game designer for Blizzard's World of Warcraft when it launched in 2004 and that game went on to grab over 10 million monthly subscribers; Rob is now the executive vice-president of game design for all of Blizzard's games.

Again, it's not clear as to why Newell and Pardo think that Windows 8 will be such a disaster. Newell did hint that his views about Windows 8 were part of the reason why the company has been trying to port their Steam PC game download service to the Linux platform.