A report published by research company Nielsen claims that the main motive for consumers buying a PlayStation 3 is its Blu-ray capabilities, rather than gaming, although only by a small amount, Neowin has discovered via TechRadar. The study also found, perhaps surprisingly, that purchasing the system for a specific game ranked lowest amongst consumers.

Using the recent release of PS3 exclusive God of War III, the researchers set out to find out whether the game would, as often expected for exclusives, help drive sales of the console. Over 700 gamers, who did not own a PS3 but were definitely interested in buying one, were interviewed during the course of a three week period that spanned across the game's release date.

While "the library of games available" was overall ranked third by the gamers interviewed, with 62 percent of respondents citing it as a motive for purchasing the console, Blu-ray was found to be the biggest motivator, with 65 percent choosing it as one of their top reasons for considering the PS3. Price was found to be the second most important factor, with 63 percent choosing "recent price reduction has put the system in my price range". 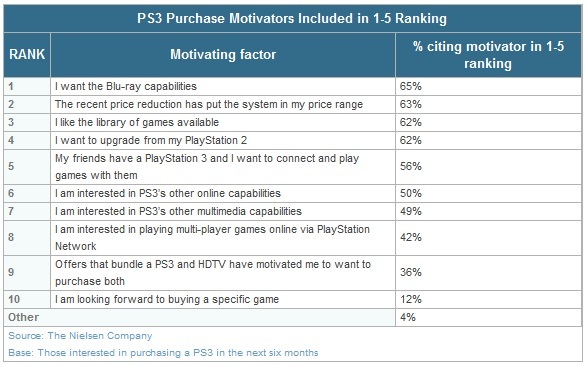 Purchasing the PS3 for a specific game was ranked lowest, with just 12 percent ranking it in their top five. However, out of those gamers considering buying the system for a specific title, 33 percent chose God of War III out of a selection of 20 games. None of the other games, which included Call of Duty: Modern Warfare 2, Gran Turismo 5, LittleBigPlanet and Heavy Rain, broke past the 13 percent mark.