Without further ado, let's take a look at some budget smartphones that debuted this year which are easy on the eyes. This article will look at devices which launched in the U.S. market this year.

One of the best looking phones of the year in the budget range would have to be the Mi Note 10 Lite. Xiaomi went all the way with this thing, opting for a 6.47-inch curved AMOLED display. The device features a subtle glossy finish which has a toned down, more elegant look compared to other glossy phones in the market.

Customers can choose between three colour options: Midnight Black, Glacier White or Nebula Purple. Both Midnight Black and Nebula Purple have bluish hues whereas Glacier White has opalescent shades that shift in the light. Xiaomi's Mi Note 10 Lite weighs 204g - a little heavier than most people would prefer owing to its large battery. The tall beauty comes in at $299.99 on Amazon, a great bargain for many.

If you're looking for a cheap phone with a premium feel, the UMIDIGI A7 Pro might be the one. The handset sports a 6.3-inch FHD+ display on and a glass back encased in a metal frame. There are also curving holographic lines which shimmer and move when light hits the device. The A7 Pro is available in either Ocean Blue or Cosmic Black. Overall, the aesthetics of the UMIDIGI A7 Pro are very pleasing to look at.

Another design factor which might interest many smartphone enthusiasts is the rear-mounted fingerprint sensor. It is positioned smack dab in the middle of the phone that is easy to access but also prone to accidental touches. If we're going by looks alone, the A7 Pro is a very agreeable choice for an even more agreeable price tag. The UMIDIGI A7 Pro can be purchased for about $169.99 on Amazon.

Korean smartphone maker Samsung has been busy making phones that fit every price tier in the market. Ranging from premium to lower tiers, Samsung has a decent collection of good looking devices in its arsenal. When focusing on a budget of $250 to $300, the Galaxy A51 stands out in particular. It's available in a loud, bright and fun shade of blue along with two other options (black and white) to cater to quieter tastes.

The Galaxy A51 features a glossy back and some angled patterns which have been etched into the plastic. Although this material is not a fan favourite, Samsung has managed to pull it off. The device sports a 6.5-inch Super AMOLED and weighs about 173g. Customers can expect to spend about $325 on the Galaxy A51. 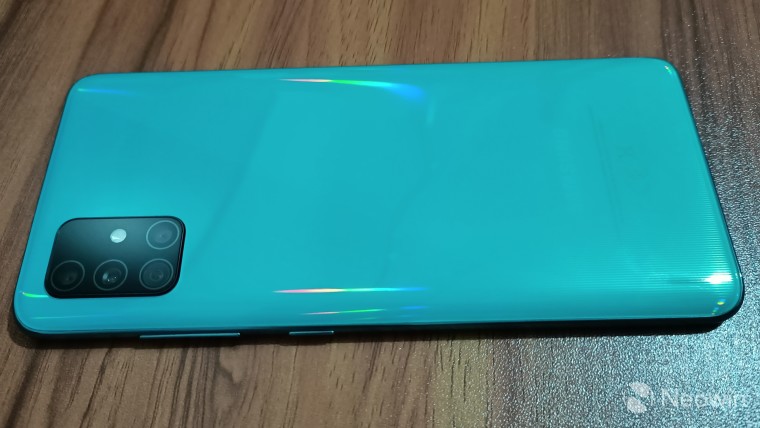 Lenovo's subsidiary Motorola has been faring pretty well of late. Apart from the Motorola Razr, many of the company's mid-rangers have also become increasingly popular. The moto g stylus is one such device, sitting comfortably in the more affordable range of devices offered by the company.

The budget Motorola phone has a 6.4-inch Full HD+ display and a fingerprint sensor on the back. A handy feature of the smartphone is the built-in stylus that fits seamlessly in the body. As for the external design, the moto g stylus comes in a dark shade of navy blue with a glossy finish. While the smartphone usually costs $299.99, it is currently on sale for $196.97 on Amazon.

And with that, we conclude our list of recommendations for budget shoppers who are looking for a visually pleasing smartphone. Would you like to add anything to the set? If you think we've missed out a noteworthy mention priced between $250 to $300 or so, let us know in the comments below!