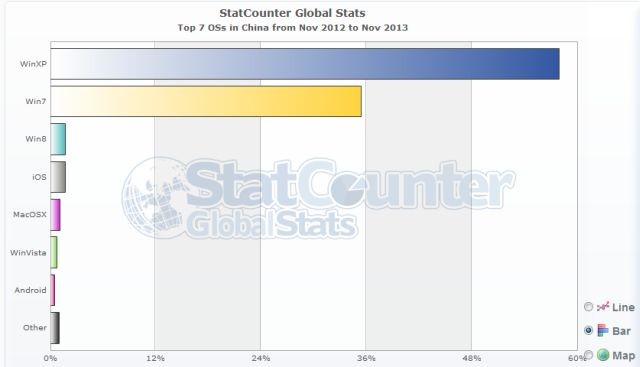 Data from StatCounter shows that Windows XP is still used by over 50 percent of all PCs in China.

In just over four months, Microsoft is scheduled to stop supporting Windows XP after over 12 years. Now it appears the government of China would like for the company to reconsider its support cut off date of April 8th.

In a report on the Chinese language TechWeb site, Yan Xiaohong, deputy director of China’s National Copyright Administration, is quoted as saying that the shut down of Windows XP support could lead to more security threats and increased use of pirated software. He stated, "These practices affect the smooth operations of genuine software in China."

The translated article does not make clear if the government of China has sent a formal request to Microsoft to extend the life of Windows XP. In November, Microsoft cut the price of Windows 8 in China down to the equivalent of just $49 for a limited time, in order to encourage PC users in that country to upgrade to the new OS.

According to data from StatCounter, over half of China's PCs still use Windows XP. Windows 7 is used by about a third of PCs in that country but Microsoft no longer sells a version of that OS in China.