If you're in China and you like the look of the Nokia Lumia 920, apparently you will be in luck as the device over there is actually faster than the Western version. China Mobile posted a picture on Weibo of their upcoming device, along with some specifications that will supposedly be included in their local Lumia 920T iteration. 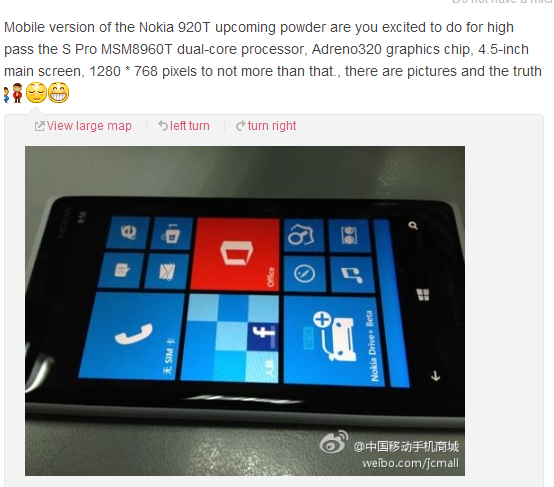 Where the standard Lumia 920 comes with just a Qualcomm Snapdragon S4 MSM8960, the Lumia 920T will bump that to a MSM8960T, which for all intents and purposes is the same dual-core chipset except it has an Adreno 320 GPU in it rather than an Adreno 225. The Adreno 320 in this Snapdragon S4 Pro chipset is around 2-3 times faster compared to the Adreno 225, so it really is a large performance boost.

The Lumia 920T almost certainly has this chipset inside because it supports the specific TD-SCDMA and TD-LTE networks that the carrier uses, not simply to annoy Western Lumia 920 owners. We do have to wonder, though... how much faster is this Lumia 920T going to be?