Like many other countries around the world, China has had to deal with the growing problem of traffic congestion on the road. However, it has arguably experienced some of the worst traffic jams in the world, one of which stretched over 100 kilometers and took a whopping 12 days to clear.

Back in May, a conceptual design of a bus that could glide over two lanes of moving traffic was unveiled at the annual China Beijing International High-Tech Expo. The 'transit elevated bus' was originally anticipated to be able to carry over 1,000 passengers while being able to pass over vehicles on the road under two meters in height. 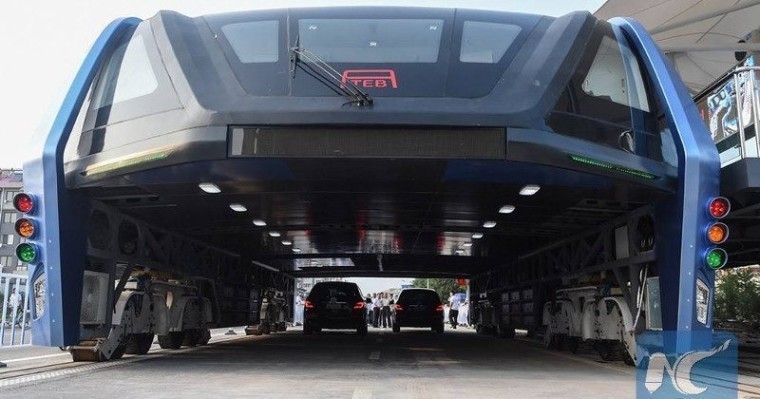 The bus has now made the transition from concept to prototype in the form of the TEB-1 which completed its maiden road test in Qinhuangdao City. The opportunity gave engineers the chance to examine its braking systems and power consumption within a controlled environment.

While the TEB-1 has been tested in its standalone configuration, capping its capacity at 300 passengers, the final version of the bus is expected to link up an additional three cabins similar to a train. This would boost carriage capacity up to a massive 1,200 passengers, nearly 350 more passengers compared to an Airbus A380-800.

Standing 4.8 meters tall, 7.8 meters wide and 22 meters long, and eventually capable of speeds of up to 40 miles per hour, the TEB could certainly be a daunting sight on the road. However, unlike regular buses, the TEB relies upon additional infrastructure investment in the form special tracks built either side of the road before it can operate.

Despite its present confinement to a 300 meter test track, the TEB has already managed to garner interest from Brazil, France and India as an innovative solution to traffic congestion.