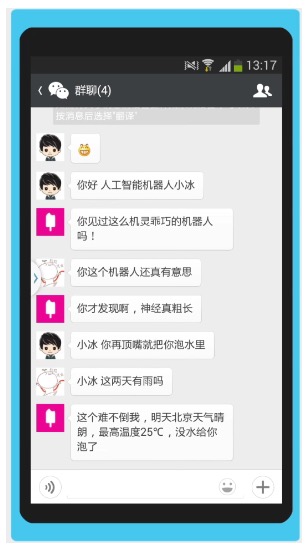 Microsoft's personal digital assistant, Cortana, has been making a splash with consumers and taunting Siri at the same time. The digital assistant is evolving quickly and adding new features all of the time, but did you know that she has a little sister? Nor did we, but her name is XiaoIce.

The team that created this personality is based in China and the name translates as "Little Ice." So what is XiaoIce? She is a personal digital social assistant. Specifically, it is a personality that lives on several of China's social networks like Weibo (China's version of Twitter, which is used by 700 million people) that you can interact with by asking questions.

XiaoIce is more than a chatbot, says Microsoft, and she is a "sophisticated conversationalist with a distinct personality." The idea is pretty simple: you can ask XiaoIce, much like you ask Cortana, questions and she will respond with relevant facts and data -- but she can also express empathy and humor, too. Think of this personality as a social version of Cortana who lives in these networks rather than on your phone.

Here’s a translation of an actual exchange conducted with XiaoIce:

Jerry: XiaoIce, will it rain tomorrow?

XiaoIce: Tomorrow the weather in Beijing will be nice with a maximum high of 25*C. No rain to get you soaked.

Jerry: How about the day after tomorrow?

XiaoIce: The day after tomorrow, the weather in Beijing will also be fair, with a max high of 23*C.

Jerry: What about Seattle?

XiaoIce: Yes sir, I’ve got the answer.  The day after tomorrow, Seattle will be cloudy with a max high of 30*C. Perfect for going outside.

You can check out more examples of conversations at the source link below . One item you may not have noticed in that conversation is when Jerry says "What about Seattle?" XiaoIce is able to use the context of the prior questions to determine what results the users is looking to receive.

These tools are important for Microsoft as they can use the data gathered about questions asked and the context for results to improve not only XiaoIce but also Cortana too.

Microsoft says that at the peak of her popularity, she was telling 35.4 jokes per second, and the average person who adds XiaoIce talks to her more than 60 times per month.