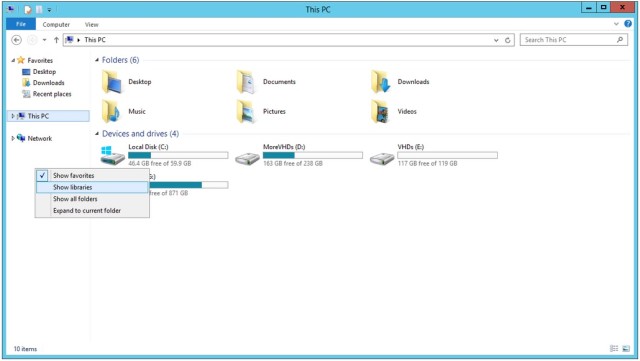 Back in May, we reported that an early version of Windows 8.1 had ditched the classic "Computer" naming for "This PC", making a minor change from Windows 8. With the Windows Server 2012 R2 Preview now available, these changes have been confirmed, and while it appeared as though Microsoft had completely ditched the Libraries feature, it's now simply hidden by default. Top-level folders are now available under This PC, replacing the primary function of Libraries and making it easier to find your important files.

If you right click in the blank space of the left hand pane, there should be an option to bring back Libraries if you were particularly attached to the feature introduced with Windows 7. Otherwise, expect to see the changes to Computer This PC when you boot up your copy of the Windows 8.1 Preview that's slated for release later this week, or the already-available Windows Server 2012 R2 Preview.

We'll have more tidbits on Windows 8.1 coming later this week, when Microsoft reveals more details about the refreshed operating system at their BUILD 2013 developer conference in San Francisco.