In a report from Forrester this week, it has been revealed from their research that Microsoft's Windows XP operating system is still the OS of choice for corporations with around 60% still using it. Windows 7, the company's most recent operating system software has risen in use by approximately 11% in the past year, surpassing Windows Vista usage. 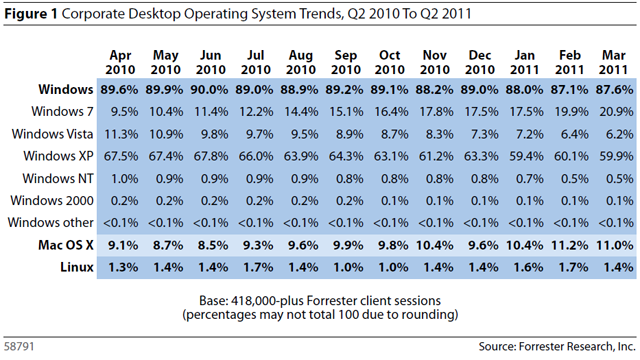 Windows XP usage amongst businesses however is on the decrease as Windows 7 proves a popular replacement for the operating system that was first launched back in 2001. Windows Vista, which was considered by many to be Microsoft's worst OS release, has never been implemented on a widespread basis and has been on the decrease in the past year, with it managing only 14% share back in November 2009.

The report, published on the 16th of June, amounts to data that was collected from over 400,000 computers from 2,500 companies around the world, according to ZDNet. As company hardware, much of which was put in place in the first half of the last decade, begins to age it has had the effect of accelerating the uptake of Microsoft's latest computer operating system.

What operating system companies use on their systems is not necessarily a deciding factor on whether the OS is successful or not but the figures do provide an insight as to whether it is popular in a variety of markets or concentrated in only a few.