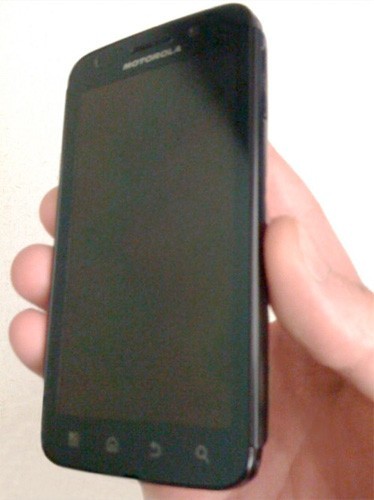 Sometimes news tips are to hard to ignore, especially when reports keep coming in from separate individuals about a similar device. Over the past several months tips have landed in our inbox about a new Verizon device from Motorola, based on Tegra 2, that will have dual-core goodness and that it will be among the first to support LTE for Verizon. All this information was compiled from two separate tipsters but there is far more to the story than just that information.

Supposedly, the Droid Terminator will compete with the EVO in size and connections, meaning expect a similar form factor to the EVO and 4G connectivity. There is some discrepancy as to whether the codename is actually Terminator, as one source claimed that the Terminator name actually came from Tegra 2 or T2. But another individual clearly believes that the Terminator theme fits into the Droid lineup (for Verizon) and points to the recent Star Wars edition Droid as evidence. The big kicker is that the Terminator will have a dual core CPU and a front facing camera, both of which are not available on Verizon at the moment.

Now the fog is a little thicker in the region of who will actually be getting the device first. Reports are rampant that the Olympus will be landing on AT&T in early 2011 running on similar hardware but sans LTE (as they haven't deployed their LTE network). So knowing that AT&T will get the Olympus and it's not an LTE device, it only leads to the speculation that the Droid Terminator (or T2) is the Verizon based device that will land in early 2011, possibly even at CES. The reason CES might be a possibility was that the original rumor said that the Terminator would be launched at the end of December but was pushed back due to "Vendor obligations." It could be that Verizon is looking to put on a big show at CES, they have an event on Thursday, January 6th, maybe that's the day we will see this device make its first debut.

Regardless of when it hits, Motorola is working on a tier 1 device for Verizon and AT&T, while the details seemed to be getting crossed by the sources, it's probably a safe bet that the Terminator is the Verizon based device and the Olympus is the AT&T counterpart. One last finagle in the tip jar, did indicate that the device would be a Verizon exclusive, but what isn't clear is that is it exclusive for form factor/name or for the specs inside the device.

It also helps that the Wall Street Journal is quoting Verizon COO as saying "We've got LTE smartphones on the horizon, Motorola will be right there". This adds credibility that Verizon will be launching the Terminator in early 2011. Other news has also surfaced today that the final launch name will be Etna, according to Androidandme.com, but at this time, Neowin can not confirm that name.

Image Credit: Engadget, but the posted photo is of the AT&T variant and is not the Terminator.