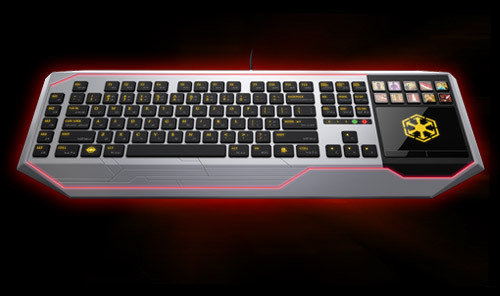 Star Wars The Old Republic is aiming to be the biggest MMO game launch of the past several years. Today at E3 2011, PC gaming peripheral maker Razer announced a new agreement to make officially licensed PC gaming products based on BioWare's upcoming game. The products include a gaming keyboard (shown above) a PC gaming mouse, a headset and a mouse pad. All of these products will be released when Star Wars The Old Republic launches (hopefully) later in 2011.

The PC gaming keyboard will feature a touch based color LCD track panel screen. The color can be adjusted to 16 million different combinations. It also comes with  with ten "dynamic adaptive tactile keys". All of the keys are programmable and gold backlighted keys. It will retail for $199.99.

The PC gaming mouse will feature a whopping 17 buttons, including 12 that are located on the thumb pad. All of the keys are programmable. It will have both wired and wireless features and also comes with a charging dock. The mouse sensitivity level can be raised up to 5600 dpi. The mouse will be priced at $129.99.

The headset will come with support for 5.1 surround sound, interchangeable faction panels, a boom microphone and more. It will be priced at $129.99. Finally the PC gaming mouse pad will have two sides "to display different faction choices" along with "terformance-grade hard surfaces for smoother mouse swiping" and a "non-slip, anti-reflective, abrasion-resistant hard coating" The mouse pad will be priced at $49.99.