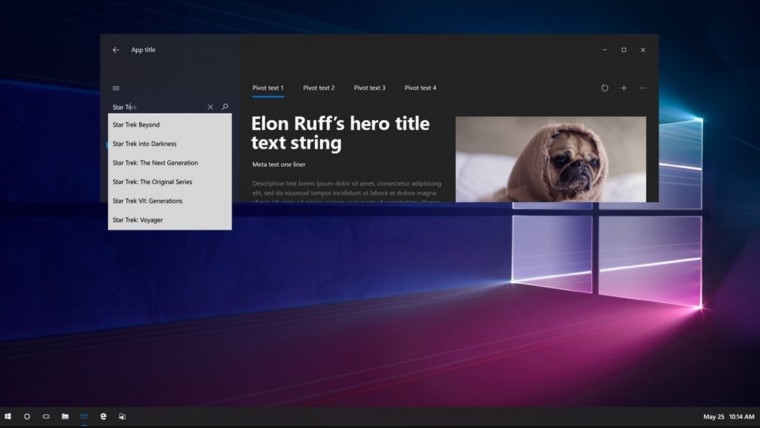 Microsoft is yet to officially release the Windows 10 Creators Update to the public, however, enthusiasts are ever more hungry for the next release as the operating system is expected to receive a much-needed facelift.

Windows 10 next major update code-named Redstone 3 is expected to arrive sometime later this year. When the update finally lands in the public's mittens, it is expected to introduce many more features, a new design language, and enhancements over what the Creators Update delivered -hopefully including features that met the chopping block.

While it is too early to state what features can be expected, many leaks such as transparent live tiles have surfaced over the past few months which indicate the general direction Microsoft may be heading towards with Project Neon. The company has also been quite enthusiastic about the new design by teasing some of the UI elements in recent Groove and Movies & TV updates released late last week.

Let's not forget that Windows 10 is nearly three years old and while the operating system has been tweaked here and there with many more features added and removed, much of Windows 10's design elements are frustratingly inconsistent and this, arguably, needs to be addressed. While users have had the opportunity to gloss their eyes over images or concepts of Project Neon, they have not had the chance to see how the new animations may work within apps and the system, until now.

Brad Sams from Thurrott.com, recently published an article that dives deeper into some of the details regarding Redstone 3 and Project Neon. In terms of features, the article is a treasure trove which sheds light on new animations and showcases early parallax effects. It is important to note these images are 'early concepts' and not indicative of a finalized idea. We all see the empty white space, and the strange lowered inclusion of the exit and maximize buttons within the Mail app, again this is an early concept.

One of the more subtle yet interesting effects is the artist icon within the Groove app. Watch how the image softly moves around inside the profile window - pretty neat, huh?

In addition, Brad shared what appears to be an early concept icon for OneDrive's

placeholders which is a highly anticipated feature expected to make its comeback with Redstone 3. The feature is also reportedly being referred internally as "on-demand files".

All in all, it is quite an exciting time to be a Windows Insider, and with Microsoft's Build 2017 conference just around the corner, it may only be a matter of weeks until more information is released.