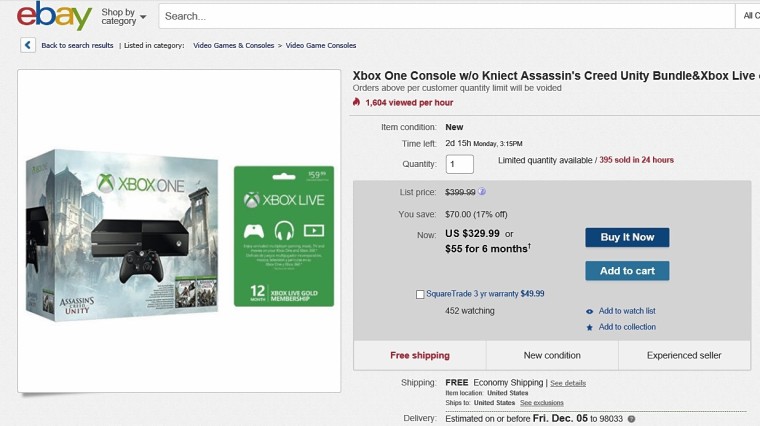 Black Friday has come and gone, and so have many of the best deals of the year on a new Xbox One. For those that couldn't pick up a new console during what Microsoft has deemed one of the best sales periods ever for Xbox: hope still remains.

Available until December 1, eBay has limited stock of the Xbox One Assassin's Creed bundle available for purchase. According to its listing, eBay is offering the Xbox One console, controller, AC Unity, AC Black Flag on top of a year of Xbox Live for $329. If you live in the United States you'll be eligible for free shipping as well.

The listing is set to expire at 3:15pm PDT on Monday, 12/1. The quantity remaining is unknown, but at the time of writing this article, 395 bundles had been sold in less than 24 hours and 450+ eBay users are watching the listing. If an Xbox One is on your list of things to buy before Christmas, you'll want to act fast for the best deals. Only Microsoft Store is offering a comparable deal to this, which substitutes the Xbox Live subscription for your choice of an extra game.