Pensioners in care homes across north-east England, UK, have been enjoying the benefits of the Nintendo Wii to keep fit and healthy, using the activities on the popular Wii Sports game.

Residents of homes owned by Helen McArdle Care have been keeping active using the innovative Wii controllers and consoles, with the bowling and golf games especially popular. Each of their 5 centres have been given a Wii with the aim of giving residents some extra mental and physical stimulation.

Carole Thomson, the manager of Sheraton Court in Hartlepool, Teesside, told the Press Association: "The residents absolutely adore them. It is making them more healthy because a lot of the time they would stay in their rooms and not come out to do their armchair exercise - but now they do and it has become a bit of a competition between them to see who's the best."

"It's the first time I've ever seen one of these things, let alone played one, but it is great fun [...] It's much better than television, it's more interesting and everybody gets involved" said Jim Fisher, a resident in Hartlepool. Betty Dennis, another resident, revealed: "I'm really enjoying it. It's given me the opportunity to socialise with the residents and staff and to get to know people better. They tell me I'm quite good, but I would not like to say so myself."

A few months ago Wii consoles were also given to care homes and sheltered housing in Greater Manchester by Age Concern and Stockport Council. According to Councillor Maggie Clay, the older people "say that they can stand up for longer, feel younger and are more confident" because of the console. Margaret Brade, the chief executive of Age Concern Stockport, said that they hoped to "organise league games across sites."

In South Lanarkshire, Scotland, the residents of Whitehills Care Home are also using a Wii for exercise and to improve coordination. The aim is to try and reduce the number of potentially dangerous falls suffered by the residents and to keep them active, especially during the Winter months when outside activities are less appealing. 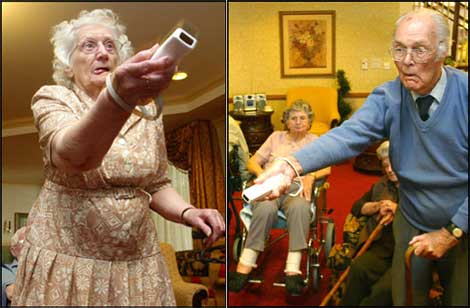