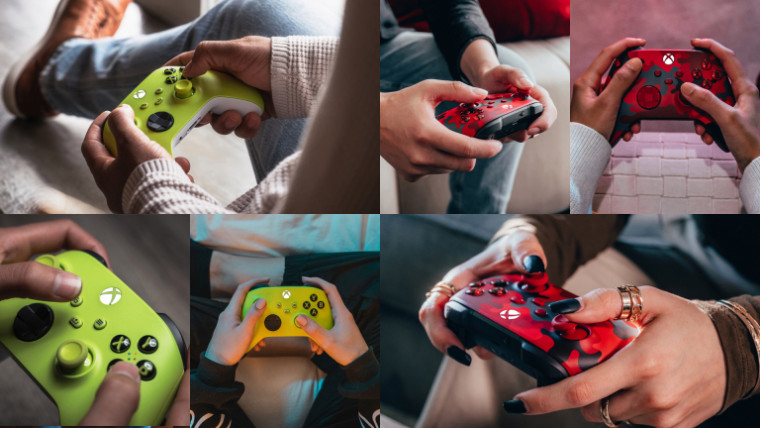 The Xbox Wireless Controller catalog expanded by two today with the announcement of Electric Volt and Daystrike Camo Special Edition controllers. These modernized Xbox controllers are from the new branch that landed with the Xbox Series X|S consoles, which has an improved D-pad, a USB-C port, a Share button, and textured triggers. Until now, this line had only included the Carbon Black, Robot White, Shock Blue, and Pulse Red variants.

The new Electric Volt features a "high-energy, yellow resin" top case and a white back case, with black accents coming via the D-pad, triggers, bumpers, and ABXY buttons. This controller will begin being available on April 27 across most Xbox markets with a $64.99 price tag.

Meanwhile, the new Daystrike Camo Special Edition controller adds to Xbox's classic Night Ops and Arctic Camo lines. The top case features a camo design combining red, grey, and black colors, plus a textured gripping surface on the bumpers for the first time for even more control. The controller will launch on May 4 with a $69.99 price tag.

Microsoft has also taken a step to make these two controller variants more sustainable, with it "incorporating post-consumer recycled (PCR) resins for the first time in any Xbox hardware." While a portion of the controllers will now use recycled materials that come from "automotive headlight covers, plastic water jugs and CDs", Microsoft says that the durability and performance will remain the same as before.

Much like other Xbox Wireless Controllers, this duo can be used across Xbox One and Xbox Series X|S console families, as well as Windows PCs and mobile devices. An Xbox Game Pass Ultimate 14-day trial will also be included with these Xbox controllers in some markets.