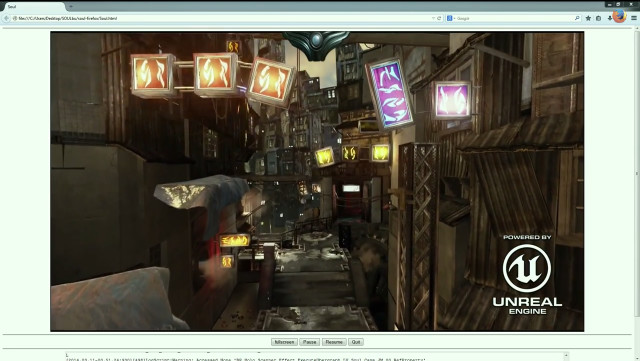 A year ago, Epic showed off its Unreal Engine 3, which utilized Javascript, HTML, and WebGL to display impressive visuals running within a browser. A year later, Epic Games and Firefox have teamed up once again to showcase Unreal Engine 4.

What used to be a platform for simple Flash and Java games has quickly evolved into one that can support robust visuals like those found on PC and next generation consoles. Utilizing asm.js, which is a subset of Javascript, Mozilla and Epic are able to create games that run at near native speeds (67%). This means that developers can start considering the web as a serious platform for gaming.

While any browser can run asm.js files, Mozilla has pioneered the improvements and has optimized Firefox to run these files to output the most consistent experience. Developers can also feel confident that the code they have developed in C and C++ can be cross-compiled into asm.js, making it possible to port next generation games from PC and console to mobile devices and the web. Both Epic Games and Mozilla will be showcasing this technology at the upcoming Game Developers Conference starting March 17th in San Francisco.