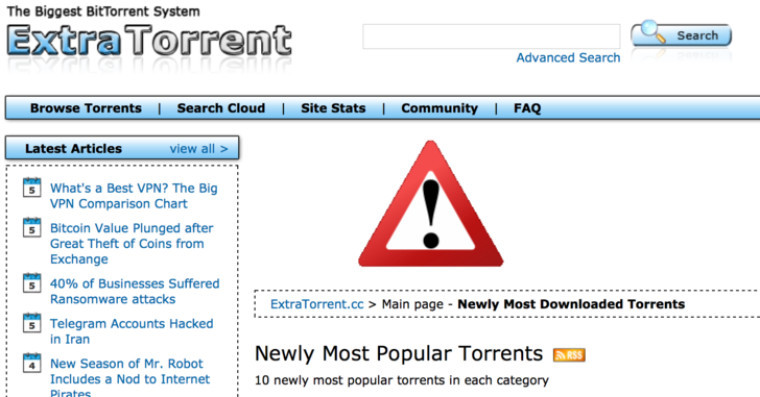 ExtraTorrent, the world's second largest torrent index, has permanently shut its doors today. The site, which launched in 2006, had steadily climbed the ranks in the torrenting world to become the third and second most popular torrent sites in the last two years, respectively, with millions of daily views and a particularly active community.

Those users logging in to ExtraTorrent today, however, will be met with a short message indicating that the website has been shut down, this time for good. While it's not entirely unusual for torrent websites to suffer from extended downtime and regular domain changes, the message found on the website today seems to indicate that the site may never return, following in the footsteps of Kat Torrents, which was - at the time of its closure - the largest site of its kind.

Users hoping for another mirror or a Pirate Bay-esque resurrection may also be disappointed as the owners of the site are also intent on permanently deleting all the data on their servers.

Torrent watcher TorrentFreak has reached out to the owner of the site, SaM, who has also confirmed the development.

How much of this is a result of legal pressure from governments and big-name studios - which claim to have lost billions in revenue over the years - remains to be seen, though it wouldn't be surprising if mounting legal pressure, which had already forced the site to make domain changes, was the ultimate cause.