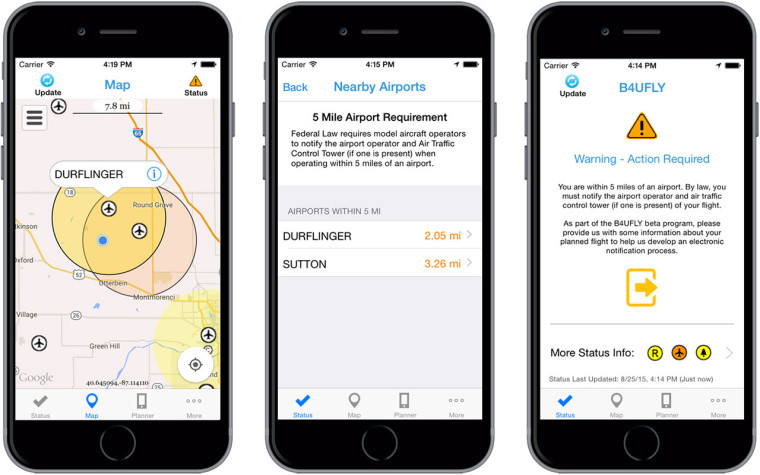 B4UFLY is a new app from the Federal Aviation Administration (FAA) showing users where it is legal to fly a recreational drone in the U.S.

The app uses a collection of data on airspace restrictions to simply tell the drone user if they can fly at their current location. An option to check a future drone flight path is also available.

1,000 people selected by the FAA began beta testing the iOS app this week. The beta will continue for at least two months, with the public release expected before the end of 2015. Furthermore, the FAA says it intends to release a similar app for Android later on.

Live updates on Temporary Flight Restrictions are included in the app, informing the operator when they can't fly in situations like wildfires. In July, firefighters in California were forced to ground their aircraft after a drone operator was flying in their planned airspace.

Other key features of the app include:

It is noteworthy that drones are permanently restricted within a five mile radius of airports and helipads without prior permission from the local control tower. The FAA says that it is trying to integrate a request system into the app after analysis showed drone users calling the control towers could cause disruption to operations.

You can find out more about the app in the FAA's Q&A document.