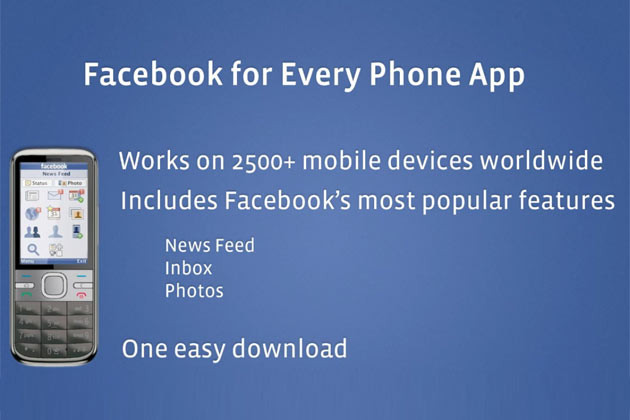 While most of us might be used to the full Facebook app for smartphones (yes, even for Windows Phone 8), the company has also ensured that people with feature phones that cost as little as $30 can also access Facebook, with a somewhat similar experience to the smartphone versions.

Facebook has announced that their Facebook app for feature phones has now surpassed 100 million users: "We are excited to announce that there are now more than 100 million people using Facebook For Every Phone each month" said the company in a statement.

Facebook claims that the app, which launched in July 2011 for around 2500 java enabled feature phones, is now available to over 3000 of the devices and can be accessed through m.facebook.com as well as a few app stores like GetJar, Appia, and Mobile Weaver.

The company also feels that hitting 100 million users is "an important milestone for us," adding:

"Facebook's mission is to make the world more open and connected, and Facebook For Every Phone enables people around the globe to connect to the people and things they care about most, no matter what kind of mobile device they use."

Facebook also recognizes that the app is more popular in developing countries such as India, Indonesia and the Philippines, with some carriers even offering free or discounted data services for those who use the app, and that's all down to Facebook For Every Phone being "optimized to use less data than other Java apps and mobile sites,".

Facebook For Every Phone uses technology from Israel-based Snaptu, which Facebook acquired in 2011 and was founded in 2007.