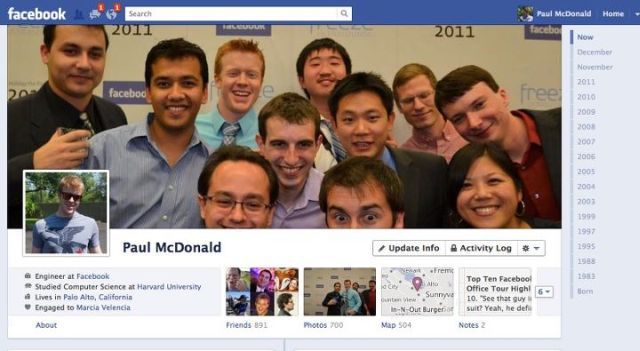 It was first announced last September and now Facebook is finally launching its new Timeline feature worldwide. The company launched Timeline early for users in New Zealand, of all places, earlier in December. As promised, Timeline will take the major achievements that you have posted in your Facebook profile and create a kind of chronology, showing your life via Facebook in place of the normal profile page. Timeline not only shows up on the main Facebook page but also on the mobile web site, m.facebook.com, along with users of the Android application.

The official Facebook blog site says that everyone using the network can view their own Timeline privately for the next seven days. People can feature something in their timeline or delete it from the page during the privacy period. Facebook users can also choose to make their Timeline public before the seven days run out. If they do nothing, the Timeline goes public after that seven day privacy period.

Timeline also includes a new activity log. This is a new private feature where users can see all of the activity they use on Facebook. They can choose to make some activities not show up on their Timeline. More information can be found on the Introducing Timeline page on Facebook.

Thanks to Neowin member dancedar who tipped us.