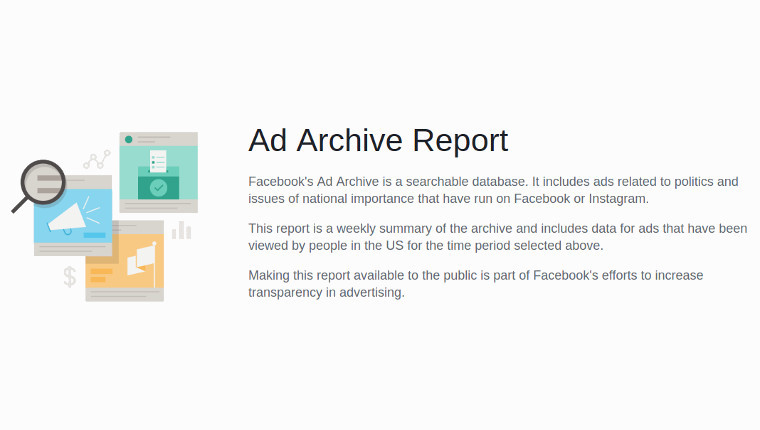 Facebook has announced the launch of its Ad Archive Report. The firm has launched the tool in order to be more transparent about who buys ads on its platform, and how much they spend. The new service will allow anyone interested to search for ads related to the U.S. elections, and issues of “national importance”, whether they’re Facebook users or not. While the launch was oriented towards the U.S., it is possible to filter ads to those targeting the U.K. and Brazil.

With the new tool you can find different bits of information including the total number of ads and how much was spent, how much each advertiser has spent, you can search by top keywords, and the week’s top spenders. ​In addition, Facebook helpfully lets you know who paid for each ad with a link to their Facebook page, it also alerts you as to whether the ad is still active. Once you find an advertiser you’re interested in, you can click on them to open a page full of their ads which are fully interactive.

Aside from Facebook ads, the new tool will offer up ads shown through Instagram, Facebook’s photo-oriented platform. The firm will update the website’s content every week and those archives will be made downloadable soon.

Facebook has also stated that it will offer an API so that third-parties can tie into the data to draw their own conclusions. The firm has launched a form for anyone interested to fill in - after an initial test it will reach out to a limited number of academics, publishers, and researchers to start putting the API to further use.