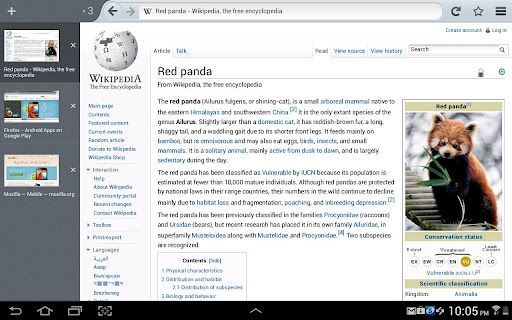 Mozilla has already launched version 15 of the Firefox web browser for PC, Mac and Linux users, but that's not the only new or updated project the company launched this week. Mozilla has also launched a new version of Firefox for Android smartphones and tablets.

The Google Play store now has Firefox 15 available for download. The change log reveals that the new version has an updated user interface made especially for Android-based tablets. It also allows users to switch between a web site's desktop and (if available) mobile web version from the menu, which should please heavy Neowin users.

Firefox 15 for Android will also allow for users to import the bookmarks and history from a device's regular web browser. Tabs have also been improved, adding a "swipe to close" feature.

As if that were not enough, Mozilla has also launched a new and free browser based first person shooter called BananaBread (yeah, we have no idea either). The project was created as a concept to make a FPS style game using C++ and OpenGL code and running on JavaScript and WebGL.

The Quake III Arena-style game has three levels to choose from, where players battle against bots, with five different weapons available. The game can be played with the desktop version of Firefox 15, along with Chrome. However, it won't work on Internet Explorer because it currently doesn't support WebGL. The BananaBread page states, "Please ask Microsoft to support it."