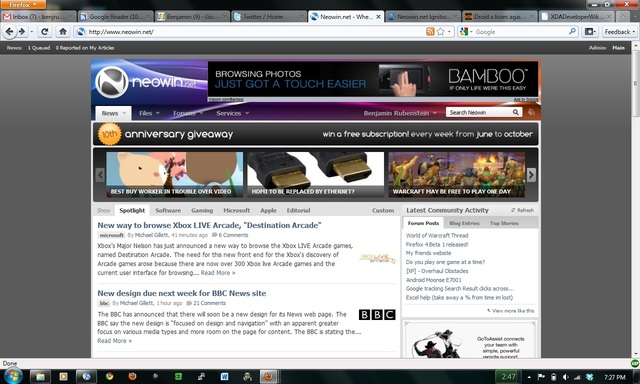 Last week, Mozilla was spotted posting a beta candidate build of its upcoming Firefox 4 web browser. Today, the company has officially released their first beta to the public. Included in the beta is the browsers much anticipated revamped user interface. Featuring less chrome, more glass (for Windows Vista and 7), and better support for standards, Firefox 4 will hopefully be just what Mozilla needs to stay competitive against its competition in the browser wars.

The new UI (pictured above), features an all-new look that delivers more simplicity and continuity across the board. Keep in mind, more improvements to the UI will continue to be be made throughout the beta process. The improved AwesomeBar now shows currently opened tabs in its drop-down suggestions. This sort of feature can be useful when the tab you want has scrolled out of visible view and you need an easy way to jump to it. The new add-on manager loads within a tab and continues to allow a seamless merge between developers and their audience. The new Firefox button, seen at the top left, is Mozilla's way of bringing the entire file menu into a single, simple to navigate list. It may take time for users to get used to, but it greatly aids in simplifying what was once deemed by some to be a cluttered and obtrusive experience. The button's underlying menu if far from complete. Expect a revamped menu layout, as well as the addition of many missing elements.

Many more features are present in this release. The browser is snappier and even allows a use to take control of how the UI is laid out (tabs on top, bottom, etc.). Firefox 4 is scheduled to go gold by the end of the year. To go ahead and help Mozilla work out all the kinks, visit Mozilla's website and download Firefox 4b1. It's currently available in English for Windows, Mac, and Linux. However, only the Windows Vista and 7 versions sport the new Firefox button.

Warning: When installing this version of Firefox, please bear in mind that most add-ons are not yet compatible with this build (this includes the Nightly Tester Tools). As of writing, there is no way to install older add-ons without tweaking the browsers configuration settings.