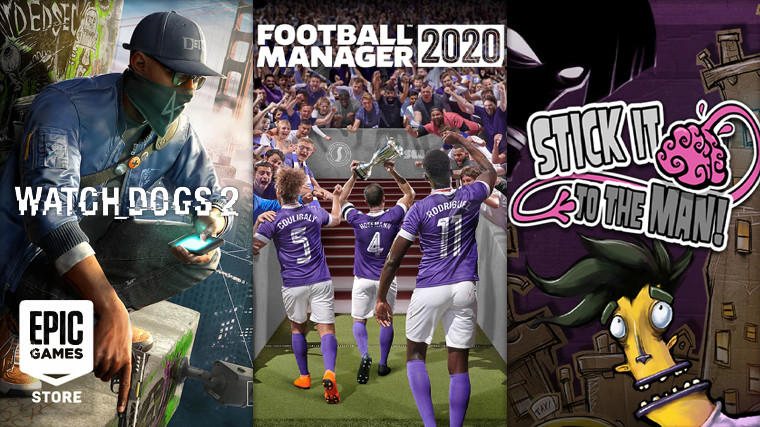 Epic Games Store has put on offer more than what it had promised last week; Football Manager 2020, Watch Dogs 2, and Stick It To The Man are available to claim and keep for free this week, taking the place of Railway Empire and Where The Water Tastes Like Wine.

Football Manager 2020, commonly abbreviated as FM20, is about managing a football club, offering playable teams, and 118 leagues in 53 countries. It also reintroduces the German national team, which was not included in FM19. There’s also cross-network compatibility between Epic Games Store and Steam so players on either platform can play together, something missing from the game’s Microsoft Store version. Here’s how the Epic Games Store describes it:

Every decision counts in Football Manager 2020 with new features and polished game mechanics rewarding planning and progression like never before, empowering managers to develop and refine both your club’s and your own unique identity.

Watch Dogs 2 brings players to a recreation of San Francisco’s Bay Area, offering an open-world full of hacking opportunities. It was originally released in 2016 and was received well by players and critics alike, appreciated for its less serious tone and a healthy use of internet culture references. Here’s how the Epic Games Store describes it:

Welcome to San Francisco! Join the most notorious hacker group, DedSec. Your objective: execute the biggest hack of the history.

Stick It To The Man is a comedic-narrative puzzle title, often praised for its unique atmosphere and voice acting. It follows the story of Ray who has the ability to read minds, etcetera. Here’s how the Epic Games Store describes it:

Hard hat tester, Ray, has a bizarre accident and wakes up with a giant pink spaghetti arm sticking out of his brain! With his awesome new powers he can read minds and change the world with stickers but he’s on the run for a crime he didn’t commit.

If you wish to claim Football Manager 2020, Watch Dogs 2, or Stick It To The Man, you can find them here. They will be free to claim until September 24, which is when Epic will put on offer RollerCoaster Tycoon 3: Complete Edition for its next giveaway.