On Friday, Microsoft posted up a huge update to its official Windows 8 blog, with more information on how the Windows 8 team made the design decisions that led them to create the Metro touch screen user interface. The same blog post also talked about some of the changes that Microsoft plans to do with the desktop version of Windows 8.

In fact, that same blog had a statement from Microsoft's Jensen Harris, which gave some attention to those Windows fans that have created their own Metro-style version of the desktop. He stated:

We have appreciated seeing people on various sites post screenshots of their proposed designs for “Metro-izing” the visual appearance of the desktop. It is exciting to see the interest and passion that goes into designing them! 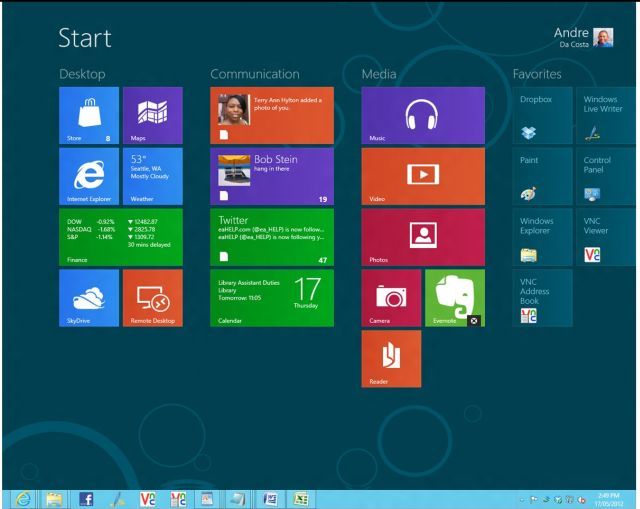 While Microsoft will be making a few small Metro-style changes to the Windows 8 desktop, one of our Neowin forum members, Mr. Dee, came up with a mock up for a true merging of the Metro UI with the familiar desktop elements, including the Start button and the taskbar.

Seriously, I am having problems with Metro simply because it is a multi-tasking nightmare. I believe Microsoft should have just melded the best of the classic desktop with Metro. Give me the option of easily switching between my desktop apps and Metro when needed, all without leaving either behind. Its simple, and here it is after using Windows 8 Consumer Preview for 2 months now. This is all I really need to honestly make Metro useful. In fact, you could have the taskbar autohide in this scenario.

One forum member, butilikethecookie, seemed to like this design, saying, "I really like it. The desktop apps could run on top of metro." Others in the forums didn't care for it, including HawkMan, who said, "wow, that would be a total usability nightmare, and ugly as sin."

The Neowin forum threads are filled with suggestions on how our readers would design Windows 8. One of them, abysal, stated:

This has probably been said already, but if we're going to be stuck with metro, at least allow the Start screen to be displayed on the left side, kind of like the charms menu, rather then go full screen and cover up the desktop and everything I was working on. That is VERY distracting and the number 1 issue for me.

In any case, we should learn in three weeks or less if the Preview Version of Windows 8 will bring some closure to some of its critics.