Analogue is relatively well-known for its high-end products focused on retro gaming, and last year the company announced its take on Nintendo's GameBoy with the Analogue Pocket. The handheld features incredibly high-end specs compared to the original hardware, with a 1600x1440 display with "pro level color accuracy, dynamic range, and brightness". The console was originally scheduled to release sometime this year, but today, the company had a series of announcements to make, including news that the console will only begin shipping in May of 2021.

Pre-orders for the Analogue Pocket will begin on August 3, though, exactly one week from today. As announced previously, the Pocket will cost $199.99, and it comes in both black and white models. However, all of the accessories for it will also be available for pre-order on the same day, and they all now have prices.

The Analogue Dock, which allows the Pocket to connect to a TV, costs $99.99, including the HDMI cable, USB Type-C cable, and an 18W fast charger. The dock also allows up to four controllers to be connected to the console, either via Bluetooth, 2.4g connections, or USB cables. The fast charging power adapter will be sold separately for $19.99 if the included charger is fast enough. 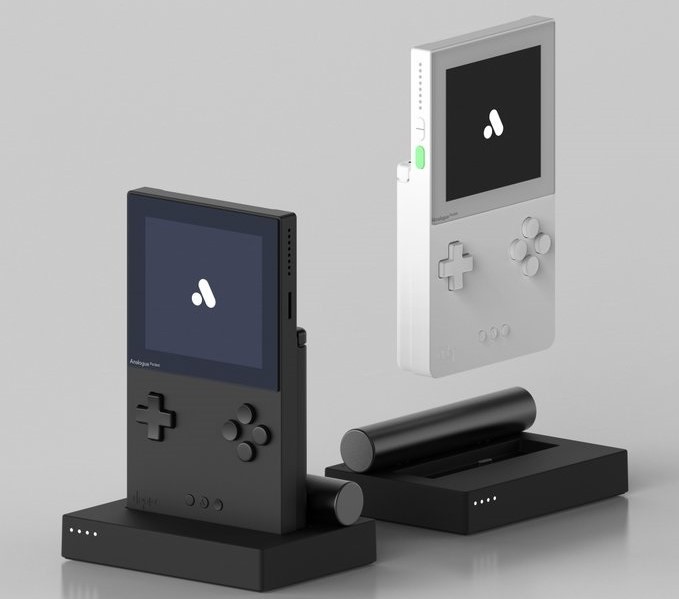 The company also detailed some new features and design changes for the hardware. There's a new feature that allows the console to emulate the original display of the hardware you're emulating, in case you want an experience closer to the original hardware. It also has a variable refresh rate and the ability to rotate the display in any direction. The Analogue Pocket has a sleep mode, so when you press the power button, the console goes to sleep and it's possible to pick up where you left off. The battery is a 4,300mAh unit and it lasts six to ten hours while playing.

Design-wise, the Pocket now has the Start, Select, and Home buttons centered near the bottom edge of the console. Meanwhile, the dock now has recessions for the Pocket to fit in for extra stability. It's also been revealed that the console uses Gorilla Glass (the company didn't specify which generation), and it's three times thicker than smartphone glass panels, so it should be hard to break.

Analogue has previously said it would sell cartridge adapters that would make it possible to play Sega Game Gear, Neo Geo Pocket Color, and Atari Lynx titles, and all adapters will also be available to pre-order, costing $29.99 each. For multiplayer GameBoy games with other Pocket owners, you'll need the dedicated link cable that's sold separately for $19.99, but the good news is it also lets you connect to a proper GameBoy, GameBoy Color, or GameBoy Advance. Additionally, the handheld will include a music-making tool called Nanoloop, and if you want to link it up to other music hardware, there are three types of cables - Pocket to MIDI IN, Pocket to MIDI USB-A, and Pocket to Analog Sync - each costing $19.99.

There are also a couple of protective accessories - a transparent hard case for $29.99 and a tempered glass screen protector for $15.99.

Finally, those interested in development, Analogue has announced an FPGA developer program, plus a partnership with GB Studio will allow anyone to create games without coding.

All of the above accessories will be available for pre-order on August 3, at 8am Pacific Time.