Quite a wild week it has been with mounting speculation over the purported iPhone HD that was initially leaked by Engadget and now confirmed by Gizmodo.

As the story goes, someone apparently found the device on the floor of a Redwood City, California bar. Cloaked in a generic iPhone case, the phone was unlike any previous iPhone in that it had a much higher resolution screen, a front-facing camera, an improved rear camera with flash, ran the upcoming 4.0 operating system, and its back was adorned with a smooth glass finish.

Though initially photographed and tipped off to Engadget for their story, Gawker Media head-honcho Nick Denton has confirmed through twitter that they did indeed purchase the device for their story:

How they came to claim the device from the leaker is unknown, though it would not be unreasonable to think that the individual could have offered to sell or auction it to the highest bidder. Rumors are now spinning that Gizmodo paid upwards of $10,000 for it and maybe even with a bonus depending on the amount of hits it would generate.

As of this posting, the story should claim at least 3 million unique views from visitors pouring in from various news organizations, Twitter, Reddit, and Digg. Factor in advertising revenue to see just how big of a return the “small” $10,000 is making Gizmodo. 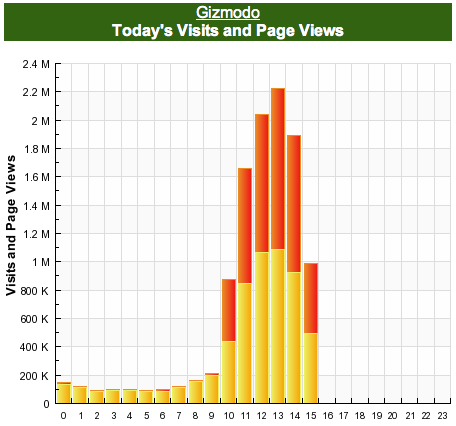 Gizmodo today also revealed the identity of the Apple Engineer who lost the phone at the bar. Named Gray Powell, the 27 year old NC State graduate works [or used to work] on the iPhone Baseband Software at Apple and seemed to have lost the prototype over a month ago on March 18th. Gizmodo has the full story here of how their source found Powell’s phone at the bar that night and how it was remotely wiped the next day.

"During that time, he played with it. It seemed like a normal iPhone. "I thought it was just an iPhone 3GS," he told me in a telephone interview. "It just looked like one. I tried the camera, but it crashed three times." The iPhone didn't seem to have any special features, just two bar codes stuck on its back: 8800601pex1 and N90_DVT_GE4X_0493. Next to the volume keys there was another sticker: iPhone SWE-L200221. Apart from that, just six pages of applications. One of them was Facebook. And there, on the Facebook screen, was the Apple engineer, Gray Powell.

Thinking about returning the phone the next day, he left. When he woke up after the hazy night, the phone was dead. Bricked remotely, through MobileMe, the service Apple provides to track and wipe out lost iPhones. It was only then that he realized that there was something strange that iPhone. The exterior didn't feel right and there was a camera on the front. After tinkering with it, he managed to open the fake 3GS.”

In the end, Gizmodo plans to return the phone to its rightful owner after revealing it all to the world. Though they described Powell as “tired and broken” from the phone call they had with him, it seems as if he is in one piece and still working for Apple.

Update: The Assocated Press has revealed that Gawker Media, parent company of Gizmodo, actually paid $5,000 for the device.