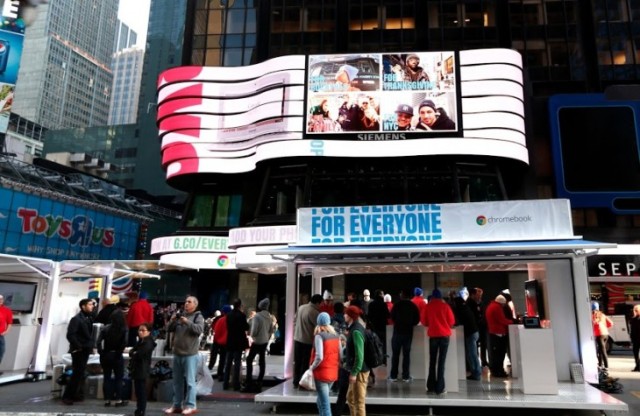 We were there just over four weeks ago in Times Square in New York City when Microsoft launched Windows 8. The company turned over 30 of the location's electronic billboards into big Start screen logos and also showed off a bunch of Windows 8 devices from third party PC makers, as well as Microsoft's own Surface tablet.

Now Google is apparently doing something similar to promote its new and cheaper Chromebook notebooks. The Next Web reports that Google has set up a temporary exhibit in Times Square where they are showing off these new Chromebooks from Samsung and Acer that start at just $199.

Google is also using a few of Times Square's billboards to showcase photographs that are uploaded by people who check out the Chromebook exhibit. If you are not in Times Square, you can still submit a picture that may be picked by Google to be shown to the many thousands of people who walk by the billboard via the Gallery For Everyone website.

The creation of both a temporary booth for Chromebooks combined with the use of the big electronic ads by Google in Times Square is a near perfect copy of Microsoft's Windows 8 launch, although it appears to be on a smaller scale. One wonders if Google got the idea after seeing all of the press coverage of the Windows 8 launch.