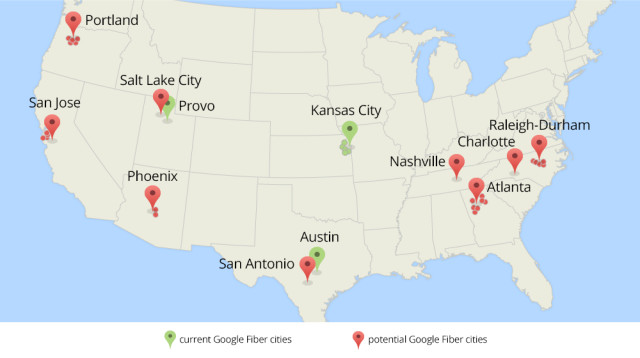 Google got into the ISP, TV and phone service business in November 2012 when it launched Google Fiber in the Kansas City metro area. Google is offering 1 Gbps downloads and uploads for just $70 a month in that part of the U.S. and now the company wants to expand that service to other parts of the country.

While the company already has plans to introduce Google Fiber service in Provo, Utah and Austin, Texas sometime in 2014, it announced today that it will pick the next cities that will get the super-fast Internet speeds from a list of nine metro areas in the U.S. (Portland, Oregon; San Jose, California; Salt Lake City, Utah; Phoenix, Arizona; San Antonio, Texas; Nashville, Tennessee; Atlanta, Georgia; and Charlotte and Raleigh-Durham, North Carolina).

Google said it will work closely with each of the cities' leaders to map out a plan to bring Google Fiber to those locations. It added:

We’re going to work on a detailed study of local factors that could affect construction, like topography (e.g., hills, flood zones), housing density and the condition of local infrastructure. Meanwhile, cities will complete a checklist of items that will help them get ready for a project of this scale and speed.

Google hinted that not all of the locations on their list will in fact be picked as their next Google Fiber cities, depending on how the preliminary plans turn out. The company will make a final decision before the end of 2014.