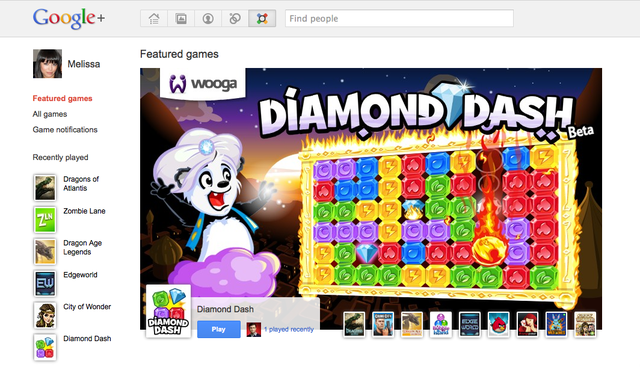 Google is expanding its Google+ social networking service into a new and potentially profitable new area. The official Google web site has announced that it has added games support to Google+. The games support has been added as a new button on top of a Google+ user's stream where users can play and share a number of titles including Bejeweled Blitz from PopCap, Angry Birds from Rovio and Zynga Poker from Zynga.

Adding game support to Google+ is sure to be an important part of its continued growth. Part of the reason for Facebook's huge growth are the various games that were made especially for that service that took off. Some games from Zynga have tens of millions of registered users such as CityVille, Frontierville and Farmville. Oddly none of those games are currently available to be played on Google+; they seem to be, at least for now, exclusive to the Facebook service.

In addition to the game's themselves, Google+ users can share achievements with their friends and the people inside their Google+ circles. Google states that Google+ users can choose to ignore the games section if they so choose.

It will be interesting to see if Google can bring in solid game developers to make games for its Google+ customers. According to outside third party studies Google+ might have as many as 25 million registered users less than two months after its launch. That number is still much lower than Facebook which has about 750 million users worldwide.