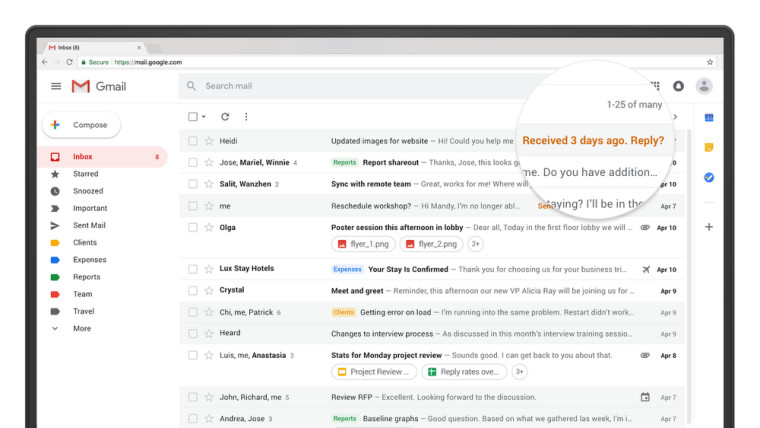 Google is finally launching its much-anticipated Gmail redesign for customers worldwide, its first in years.

The new redesign is aimed at getting you to do more with your email, without actually leaving the main inbox screen.

To that end, the firm will be making it easier to see and interact with received attachments like documents and images. If the crux of an email is simply filler to get you to read an attachment, you can bypass all that and jump straight in.

Google's new redesign is also going to add more focus on tasks, and will also integrate Google Keep in the sidebar.

Smart Replies - which debuted in Inbox by Gmail and will be making their way to more Android apps later this year - are also present in the new Gmail redesign. Google will surface contextual replies for emails that don't need much thought, allowing you to deal with a barrage of emails with little effort.

Google will also be adding a new confidential mode to their web-app. This feature will allow a user to send an email with restrictions such as an expiry, or limiting the option to forwards, copy download or print messages. While this doesn't take away other options users may have like taking a screenshot of the browser window or taking a picture of their screen, it does help to make it more secure.

Google's desktop web-app isn't the only thing getting some attention and the firm will be bringing some new features aimed at reducing inbox clutter to Google's mobile apps.

"High-priority notifications is a new setting that only notifies you of important messages, keeping interruptions to a minimum. Gmail can also recommend when to unsubscribe from mailing lists." Google's David Thacker explains, "Using intelligence, unsubscribe suggestions appear based on cues like how many emails you get from a sender and how many of them you actually read. "

Google's new Gmail should be going live for all users in the next few hours. While the firm says you can try it out now, it remains inaccessible to users in European regions as of time of posting.