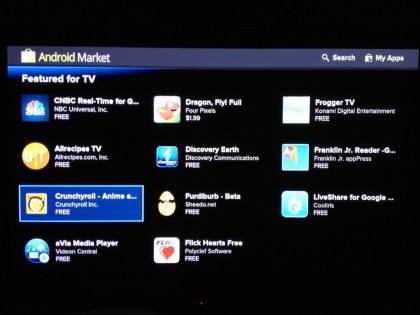 Google is still trying to get its Google TV project to become more attractive to mainstream consumers. The effort to merge televisions with a Google-developed operating system has so far only brought in two hardware partners. One is Sony, who put Google TV inside three models of its Bravia TV line. The other is Logitech, which created the Revue set-top box with the operating system inside. Sales for both companies have not been up to expectations. Google has been promising a major update for Google TV  devices for a while but so far it has yet to be released.

This week, Zatsnotfunny.com has posted up some new screenshots showing off the new user interface of Google TV 2.0. As promised, this new version is based on Google's Android 3.1 operating system, also known as Honeycomb. It will allow Google TV owners to download and use a number of new apps, including the Wall Street Journal and more. Google TV owners can also rate the apps they use just like their Android app counterparts.

Google has announced it is seeking more hardware partners for Google TV, but so far the company has yet to reveal any new companies that will offer Google TV on their products. There's also no word on when the big 2.0 update will actually be released, although it should be any day now. Google's executive chairman Eric Schmidt recently affirmed the company's support for Google TV, saying, "We're absolutely committed to staying, to improving Google TV."

Image via Zatz Not Funny