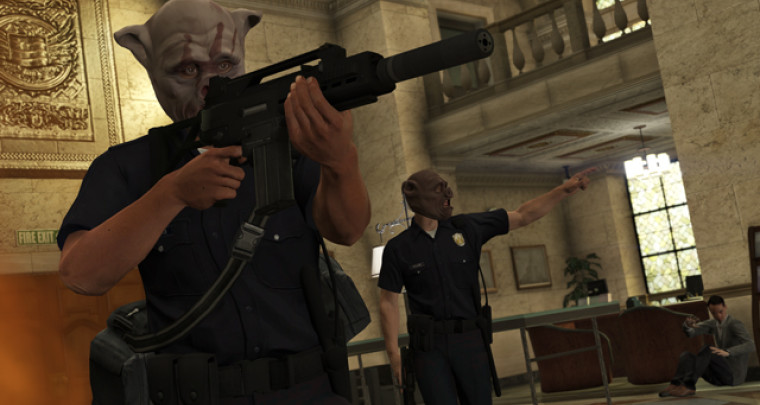 The long-awaited GTA Online Heists update is now finally available to download. As previously revealed, the free add-on weighs in at 4.75 GB on the Xbox One and PlayStation 4 while is relatively lesser in size, amounting to 1.5 GB on previous gen consoles. Rockstar Games detailed the new features in this update which includes:

FOLLOW THE LEADER
First things first: every Heist needs a leader and the Heist Leader is going to need to be at least rank 12 and own a high-end apartment with a planning board in order to co-ordinate the crime. Not only do Heist Leaders cough up all of the setup costs up-front, they have complete control over team roles and the cut of the final take each Crew Member gets. Additionally, Heist progress is only saved for the Heist Leader - so when choosing a leader it makes sense to link up with someone you can trust.

ALL TALK
It should go without saying that good teamwork starts with communication - and headsets are important to successfully pulling off Heists. Whether it's telling a lookout where they need to be, a passenger locating vehicles using the Trackify app and giving directions to the driver, or two infiltrators operating a pair of security panels in perfect sync.

ROLL CALL
At different stages of each Heist, Crew members will be assigned different roles. These could be slightly different responsibilities within a single scenario - for example, two lookouts and a bodyguard while a buyer completes a less-then-legal exchange of information - or larger deviations, like two players patrolling in an attack chopper above while the other two infiltrate a facility below. It's important for all players to know their strengths and, in turn, for the Heist Leader to assign accordingly. If you see yourself as an ace pilot, then put in some time at the Flight School and increase that flying stat to prove it.

TOOL UP
Professionals don't expect the customer to provide the tools for the job. While there might be some more specialized equipment that may be provided (or that you'll need to acquire) along the way, for the most part you'll be using your own custom vehicles and firearms to get by. So it's a good time to take stock and make sure your garage and your arsenal are prepared for all possibilities. Silencers on guns and RPGs in general are especially useful for certain Heists while four-door vehicles with added armor can come in handy if you like to keep your friends close. With GTA Online Heists you'll be able to unlock a range of new vehicles and gear including an extensive selection of new outfits perfect for whatever each Heist throws at you.

BONUS ROUND
For the financially ambitious there are a few ways to increase the income from Heists in a major way. First off, each Heist has its own Elite Challenge which, upon completion, will yield a substantial cash bonus. These can be completed multiple times, but be warned: they're no cakewalk.

On top of that, there are Special Heist Completion bonuses that can only be achieved once per person, but will add some serious zeros to your bank balance. They are as follows:

The update was promised before the GTA V's release announcement in September 2013 and now that the add-on has finally made its way to consoles, perhaps Rockstar Games can now focus more on releasing the long overdue PC version of the game, which has been delayed several times. It is now scheduled to make its way to PCs on April 14 this year.