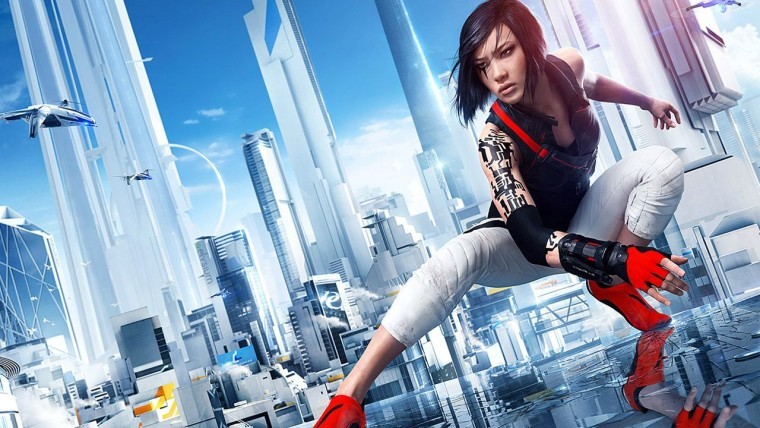 Mirror’s Edge: Catalyst, the upcoming reboot of the Mirror’s Edge franchise is set to release in early 2016, and up until now, only one short piece of gameplay has been released from Electronic Arts. With developer on the franchise, DICE, working on this fall’s Star Wars Battlefront, Mirror’s Edge has been somewhat placed on the back burner since its announcement. The game has promised to build on the strengths of the 2007 classic, and dispose of what innovations may have been less suited in its predecessor.

This week, I was given a hands-on session with a pre-alpha build of the title, to experience a feel for the game, and some of its additions. The build was run on a high end gaming PC, with Windows 7, however use of the supplied Xbox One controller was recommended. Before we were given access to the game itself, we were sat down to watch an eight-minute video, covering some pre-released information on the setting, and what the developers envision the final product to include. The video emphasized that the game aims to be a beginning of a fresh start for the franchise, and while acknowledging the original title, plans to build on values not previously explored.

The game will take place in the City of Glass, before the events of the original Mirror’s Edge game, and show how Faith’s character was exposed to the hidden dark side of the controlling corporations, changing her view on the city. Kruger Security, led by Gabriel Kruger, are told to deal with civilians who fight against the system and take those who speak their minds, off the grid. The city is full of propaganda, holding a society of brainwashed inhabitants. The runners, and a group named 'Black November' with 'terrorist protest methods', are the two major factions of rebels, with an intent of bringing back a democratic society.

The gameplay demo was distinctly split into two sections, starting with a short five-minute snippet from the story mode, creating an atmosphere and showing the situation Faith is currently in. After this small cutscene and tutorial, the demo skipped over to free roam, to access three distinct activities in the world. 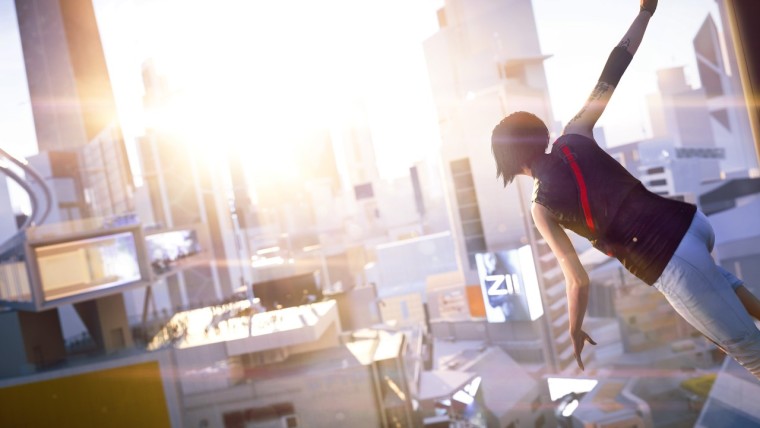 The story begins with Faith leaving holding, and entering the outside world. It is stated upon release, Faith must find employment within 14 days, otherwise further action shall be taken. Faith still shows her confident attitude, with retort towards guards within the facility. After exiting the building, she is told to follow the designated route through the tight alleyways, and walk towards the bus currently waiting. The rain is dripping down the glass buildings, and lights in the area produce a visually pleasing flair, seen in most recent DICE games running on the Frostbite 3 engine.

After walking through two automatic doors, a red doorway contrasting with the white décor is opened, and a new, mysterious character attempts to grab your attention. This character claims to be working for Noah, a character Faith is close to. The man has previously been seen in multiple trailers, and appears to be a key character in the storyline. At this point in the game, he appears to be mysterious and concealed, but it is likely development of this figure will lead to a more established relationship. The character has been seen previously in earlier content, wearing a sleeveless hooded leather jacket, and sunglasses.

You are passed a contact lens, which when placed into the eye, presents a heads-up display, with information and propaganda obstructing a majority of your view. This is caused by interference produced from a device given to Faith by the KSEC guards. Once this is removed, the display becomes much more clean, and becomes a key feature for displaying in-game information. This display is what shows runners their objectives, information and supposedly the runner vision – an iconic feature of Mirror’s Edge.

The last area of this section was used to learn basic movement mechanics, and teach how to traverse across the urban landscape. The controls in Mirror’s Edge: Catalyst have been greatly refined, and focus on two styles of movement. It was emphasized that ‘Up Movements’, such as jumping, and scrambling up walls are mapped to the left bumper, with ‘Down Movements’, like sliding and crouching using the left trigger. This was a clear an emphasis of the tutorial, and opens the game to less experienced players, while still rewarding those with high skill.

The original Mirror’s Edge has always been close to my heart, and after almost learning the level design off the back of my hand, the concept of moving around levels is nothing new to myself. In the build I played, the game felt responsive a majority of times, however at points, latching onto objects sometimes failed. Unlike the previous games, where Faith slightly snapped to key environmental objects, some movements require higher precision to grab a hold of. It should also be noted that view bobbing has also been massively reduced, and as a result feels less dynamic than before. 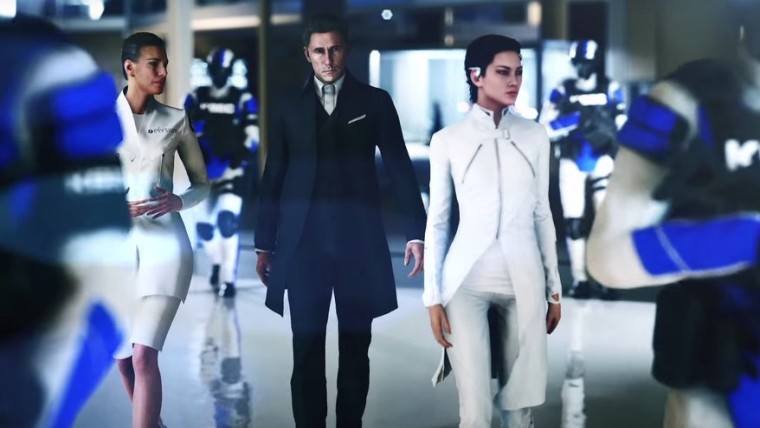 After getting to grips with the style of play, the game skips forwards to a more open map, where I got my hands on the free roam mode, newly introduced to Mirror’s Edge. From here, I could use the new map system, and plan my routes using the integrated waypoint system.

When selecting an area to visit, or to arrive at a start of a mission, a waypoint can be set, which you must traverse to. Unlike a traditional waypoint system, where a marker is displayed on the HUD, certain pieces of the environment are colored red using runner vision, indicating the recommended path to take. When followed, this is assumedly the most efficient route to take, to arrive at the location.

In the demo, three free roam gamemodes were playable, all focusing on different features of Mirror’s Edge Catalyst. From the modes shown, there was great variety, with objectives available for all styles of play. It can be assumed these will be dotted across the entire map, and will be side missions to complement the main storyline.

Combat’s focus has most notably shifted, with a focus on positioning and approach to the situation, rather than timing and precision. The combat has been sped up massively, and expanded with more lethal attack options. With the removal of useable guns in Mirrors Edge: Catalyst, the close quarters combat has a range of perfectly animated attacks, based on the approach of the player. Enemies will sometimes take more than one attack to down, depending on the situation. 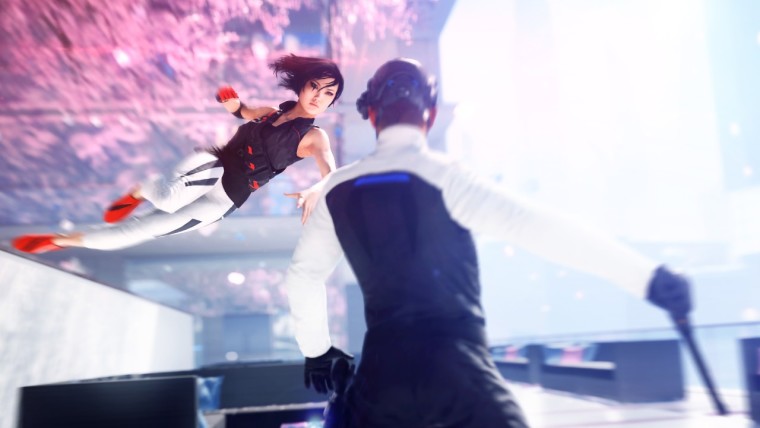 After these missions, I was given a small chance to roam the city, and search for packages hidden on the map. In the area playable, there were a lot of close quarters walkways, with rooftops being more populated and built-up than the first Mirror’s Edge game. Whether this was just the area I went to, or representative of the whole map, the areas to traverse felt slightly linear, and while many routes were available, they still felt pre-planned, with a lack of creative movement. The map still appears to be open, and feel alive with a range of activities, but the actual free roam still has restrictions.

Overall, Mirror's Edge Catalyst is shaping up to become a great title, with mechanics which improve on almost all strengths of the original game. Small noiances have been removed in Catalyst, and leaves a product suited to a majority of franchise fans. The game flows more than the previous game, and creates an action-filled cinematic experience, significantly faster, and more dynamic. For this entry to be successful, a large amount of content must be delivered upon at launch with opportunities for all players, regardless of their play styles.

Mirror's Edge Catalyst drops on Xbox One, Playstation 4 and PC via Origin on February 23, 2016 in the United States, and just two days later on February 25, 2016 in Europe.