On December 5th, Verizon will be launching its 4G network nationwide and Neowin got a sneak peek of the new LTE technology. Verizon is touting that it has the world’s largest LTE network and is deployed in 38 major metropolitan areas, covering more than 110 million Americans, before the end of the year. The 4G blanket is hitting a large swath of the United States as Verizon tries to position itself as the premier 4G provider when compared to AT&T and Sprint.

Currently Verizon is only selling two USB modems that will be able to harness the 4G network, the Pantech UML 290 and the LG VL 600, but did say that 4G enabled phones will be landing in Q1. For those not familiar with 4G (know that 4G is a branding term as according to the ITU-R,  the data rates don't meet their requirements for true 4G), it is the latest generation of mobile broadband to be offered by wireless carriers.  As it stands right now only Sprint is competing with Verizon on the 4G network front, as AT&T has not launched its iteration of LTE.

4G (or LTE) offers faster download and upload speeds for the end user. In essence, it provides speeds that rival that of low end home broadband offerings, and its speeds are fast enough for the vast majority of users for their daily needs. Verizon has deployed its network on its recently acquired 700Mhz frequency which should give its network greater building penetration than its current 3G network. Verizon proudly states that it will be the only carrier to offer a 4G network nationwide on the 700Mhz platform.

What everyone wants to know is how fast it the LTE network? As the picture above shows, in real time, speedtest.net was able to measure 8.35Mbps down and 4.05MBs upload. This was the average of three runs with ranges from 7-10Mbps down and 3-5 Mbps upload; average ping time during the tests came in from 48-112ms. These speeds are rather impressive when you think about that this type of access can be obtained anywhere a 4G signal is present, easily fast enough to browse YouTube or Hulu with minimal buffering. Verizon claims that the speeds should average 5 to 12 megabits per second (Mbps) on the downlink and 2 to 5 Mbps on the uplink in a real-world loaded network environment. The real test will come in a year from now when there are millions of LTE devices running on the network as the quoted speeds were obtained from simulated network loaded environments. 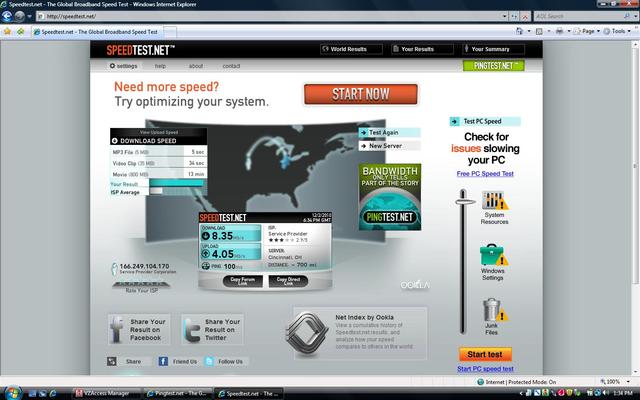 Verizon Wireless will be offering two 4G LTE Mobile Broadband data plans: $50 monthly access for 5 GB monthly allowance or $80 monthly access for 10 GB monthly allowance, both with $10/GB overage. While not the cheapest data connectivity packages available on the free market, this is the latest and greatest so expect there to be a premium for its pricing. No pricing has been announced for the cost of 4G on a handset, currently Sprint charges users a premium of $10 a month to use its 4G network.

So what is there to say about LTE? Its fast, relatively widely available, and its finally here. While we do have to wait for Verizon to bring 4G phones to market, the good news is that it wont be long. 4G represents a new era, an era where broadband speeds are truly accessible nearly everywhere and on December 5th, Verizon will make it available to millions of Americans.