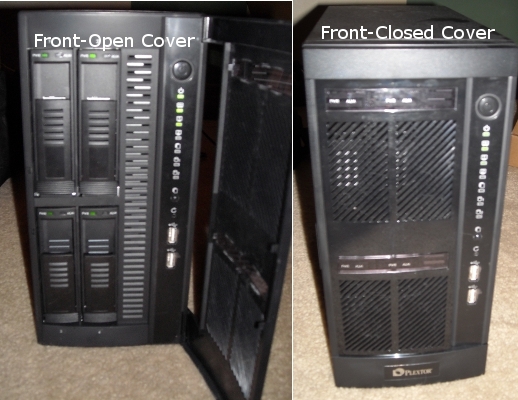 Plextor sent us their PX-NAS4 and gave us a chance to get down and dirty with the device. The PX-NAS4 is essentially a home storage server with the capability to connect to the computer via Ethernet through a network share or via iSCSI, USB or eSATA. It's primary focus is its ability to network, it has dual gigabit Ethernet ports to allow network failover or you can combine to two for up to 2Gbps of data throughput.

The NAS comes with a piece of software that will help you find it on your network after it gets an IP address automatically from DHCP, from there the software will let you configure the IP address to something permanent or you can leave it on DHCP if you desire. The rest of the configuration is done via a web interface. The web interface is fairly easy to use, it took no time at all to configure four disks in a RAID 5 array. I simply had to choose the RAID type I wanted, select the disks I wanted to add and choose whether I wanted one of those disks to be a hot spare or to be part of the RAID configuration. After you select the RAID type you can then create volumes on the NAS, this is where you can break down the drives into chunks to store different types of data. You have the option of creating a normal volume, an encrypted volume or an iSCSI LUN.

The NAS is definitely full featured and set out to do exactly what it says it will, once you have it setup hopefully you won't have to mess with it again. If a drive goes bad, as long as you have the proper drive redundancy setup, all you should have to do is put in a new one and the NAS will do all the work to get it up to speed with the rest of the disks. Copying files to the device was very simple my only real complaint with the NAS is the size, coming in at 5.51 x 12.0 x 11.8 inches and weighing over 13 pounds without hard drives, it doesn't blend in with the rest of the furniture very well.

The Plextor PX-NAS4 can be purchased from a few online retailers and goes for $385 without hard drives. It is intended for those interested in serious backup and storage.