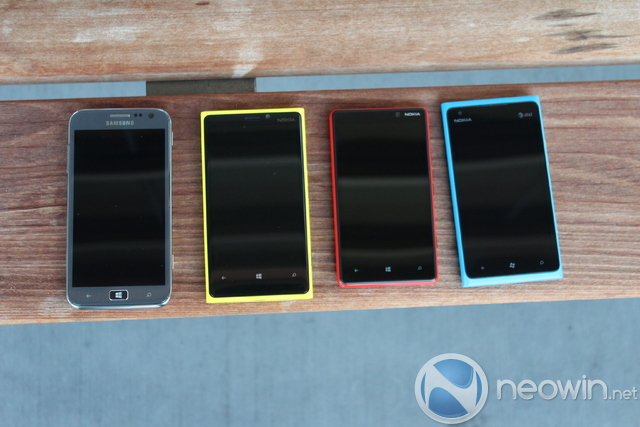 Neowin has spent the better part of this week up in Microsoft's neighborhood and among the many meetings and conversations, we got a chance to play with the Samsung ATIV S, Lumia 920 and 820 (the blue phone above is my Lumia 900). While our time with the devices was brief, consumer impressions are made in just a few seconds after picking up the device and so we have posted our initial impressions below.

The devices were all production models that will be hitting the shelves here in the near future but we were not allowed to turn them on. Microsoft said that they have a few surprises still up their sleeves with Windows Phone 8 and that when the time is right, they will show them off. So consider that the information below based solely on the look and feel of the devices.

The Lumia 920 is a top tier device from Nokia that will compete head to head with the newly announced iPhone 5. In your hand it feels similar in build quality to that of the Lumia 900. The shiny surface on the yellow 920 was not slippery in the hands as one might expect and it brings over the Lumia 800 rounded edge on the front glass. For those of you who have the Lumia 900, you will notice that there is a small ledge at the edge of the screen, this is not present on the Lumia 920. The device is solid, has a great weight to it, and feels like a fantastic phone as long as Windows Phone 8 is able to complete the package from a software perspective.

The Lumia 820 is clearly targeted at a lower market segment. The back cover pops off with a bit of effort which is a good thing as it does not feel like the interchangeable covers will fall off while using the device during your daily routines. In your hand it is noticeably lighter than the 920 and despite only having a slightly smaller screen, it definitely feels like the younger sibling when compared to the 920. The 820 has a more plasticy feel to it when compared the the 920 but this is expected as the lower range device will certainly be a budget winner when compared to other devices on the market. 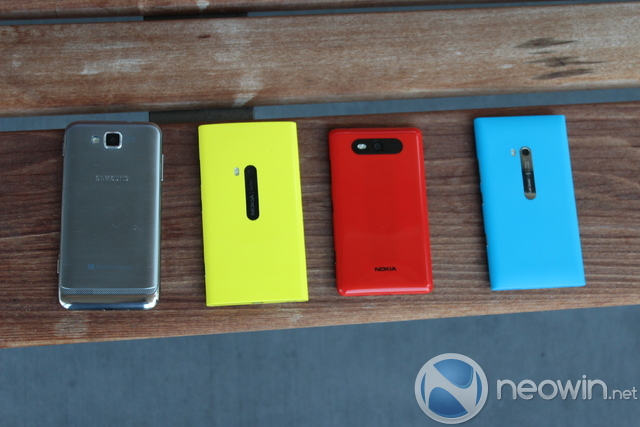 The Lumia devies felt complete with no noticeable creaking or shifting components when playing with them in your hand. A quick horizontal and vertical torquring on the device was met with much resistance and the phones showed little flex when pressure was applied.

The Samsung Ativ S is a different approach to the Windows Phone segment. Unlike Nokia, Samsung's device has a more industrial look to it and swaps the bold colors of the Lumia for gun-metal grey and is wrapped in an aluminum package. The aluminium enclosure feels good in your hand but the pictures are a bit deceiving. Despite being made of metal, the phone is really light and depending on who you are, this may be a good thing, or not. I am not fully convinced either way on the Ativ S, it certainly looks attractive but the overall ranking of the device is to be determined when we get more time to fully test out the device.