After the due celebrations for the first 25 years of OS/2, another important computer-related anniversary takes place during these days: it’s the twentieth “birthday” of Windows 3.1, the OS-wannabe GUI that began to turn Windows into the incredibly powerful and well-known brand we take for granted today.

Benj Edwards reminds us that on April 6, 1992, Microsoft released Windows 3.1: it was the first really successful version of the Windows GUI running atop of MS-DOS, bringing important improvements over the previous version (released two years before) and selling three million copies in the first two months. 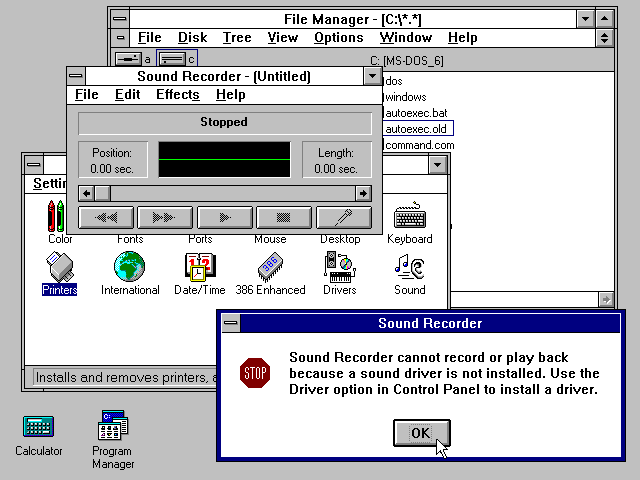 Windows 3.1 was the first version of the Microsoft operating environment (as we used to call GUIs running atop an external OS back then) to break compatibility with real-mode CPUs (8086/8088), requiring an Intel 80286 processor to run in “standard mode” or a 386-class CPU to take full advantage of the software and (underlying) hardware capabilities of the time.

CPU support aside, Windows 3.1 featured the “Program Manager” to manage groups of applications and the “File Manager” to copy, cut and paste files within a graphical tree-like view: the two features have been merged into “Windows Explorer” from Windows 95 onward.

Windows 3.1 introduced True Type fonts, vector-type char sets invented by Apple years before that for the first time turned the Microsoft GUI into a viable desktop publishing platform. The operating environment also saw the first appearance of Minesweeper, a rudimentary version of the Registry (now a fundamental part for the inner workings of Windows), a “modular” and customizable Control Panel, Object Linking and Embedding technology to dynamically share images and data within programs, better support for multimedia and so on.

It’s easy to evaluate the heritage of Windows 3.1 and subsequent, minor revisions considering that the operating environment was still supported for embedded applications until 2008, and that Microsoft decided to leave the OS/2 project co-developed with IBM after having experienced the huge success of its own product.