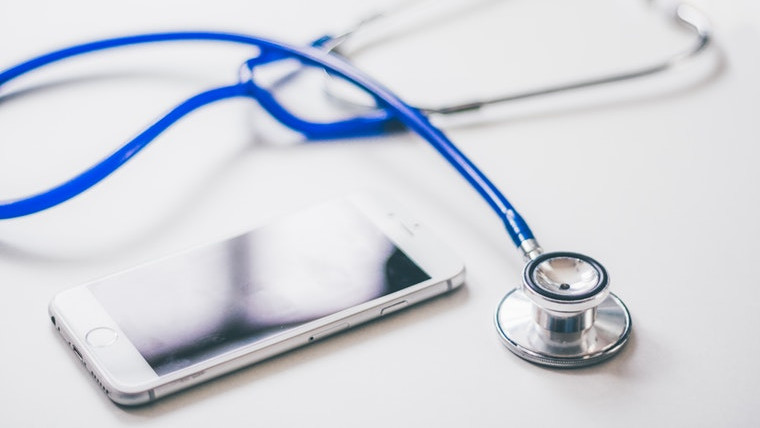 With the New Year not far behind us, hopefully, you're still sticking to your New Year’s resolutions. One common resolution that people make is to become more healthy – it’s a tough goal to keep but there are plenty of apps on both Android and iOS that can help you achieve these goals. Here are some apps that I’ve been putting to use recently that readers may find helpful in the pursuit of their goals.

Brush DJ is my first choice on the list because it does such a great job at addressing bad habits when it comes to brushing teeth. What’s nice about this app is that it has the approval of the NHS in the UK which means the advice given in the app, and the way it functions, have been reviewed by experts who have subsequently recommended it to ordinary people.

Brush DJ’s core function is to play music while you brush your teeth, it plays for two minutes to let you know how long you should be brushing for. Above the play button, you’ll find tips scrolling along on how you can better preserve your teeth and there’s an ‘age-specific information’ section that gives you guidance based on your age.

The app is littered with other features too such as daily reminders to brush, reminders to visit the dentist, and reminders to replace your toothbrush. If keeping your teeth is important to you, I definitely recommend this app and getting into the habit of using it whenever you brush. 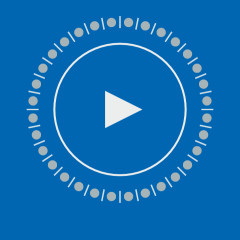 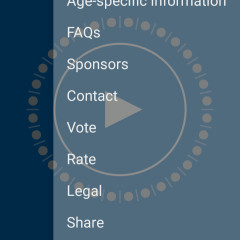 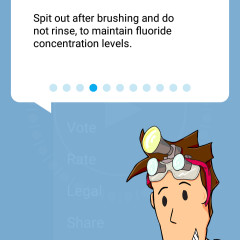 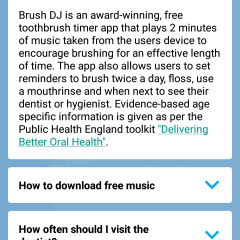 HearWHO, as you’ve probably guessed, is an app that tests your hearing and lets you know whether you’re hearing is OK, deteriorating, or very bad. Like teeth, once hearing has been lost you’ll be dependent on artificial means to regain the function so ideally, you’ll want to preserve your hearing as long as you can.

As the name suggests, this app comes from the World Health Organization (WHO) and is intended to allow users to test their hearing in the comfort of their own home with nothing but a pair of earphones and a mobile device. With this app, you run through a short setup menu then enter the numbers on the keypad that you can hear being read out through the static.

According to the World Health Organization, this app is useful for those that listen to loud music, it can also be helpful for testing elderly people to see whether they’d benefit from audio devices such as hearing aids. Give this app a go if you think your hearing is deteriorating or if you just want to do a general check. The app will record the results of past tests so you can compare your hearing at a later date. It also comes with a helpful FAQ that will assist you in looking after your hearing. 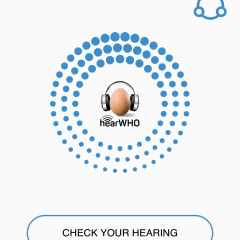 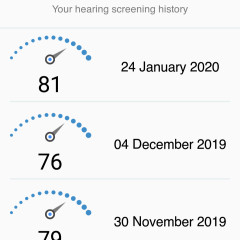 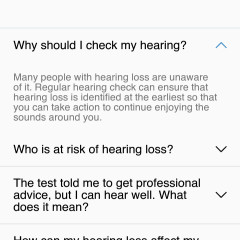 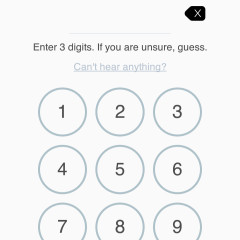 The third app on the list is Moodpath. It’s the only app on the list that deals with mental health instead of physical health. With it, you’ll be notified three times per day to record your mood, you’ll receive a couple of questions, you’ll pick some words to describe the way you feel, and there’s a text box for you to write notes if you want to go into more detail.

The idea behind the app is to see, over 14 days, whether you have symptoms of depression. While you may have noticed yourself experiencing a low mood you may not be experiencing depression; this app will let you know if you are, though. After the 14 days are over, you’ll get a report from the app explaining if it spotted the signs of depression, the evaluation includes recommendations for action and a doctor’s letter that you can send to your GP who will be able to use the insights to help you further.

While the app is geared towards spotting depression, it’s also a nice tool for tracking your mood over a long period of time and can be quite therapeutic if you take the time to log entries fully by writing about your mood at each point of the day. The app doesn’t require you to log in so information that Moodpath receives is anonymous and is not passed to any third parties. If you decide to give your doctor the generated letter, it'll be transferred to them with end-to-end SSL encryption.

You can also pay for Moodpath Plus which gives you access to written and audio content that cover things such as handling looping thoughts, dealing with conflicts, relaxing, getting better sleep, developing self-confidence and a positive attitude and more. I’ve been using the app since August and at some point along the way was given access to the Plus content free of charge and you may get it too, so wait a bit before splashing the cash. 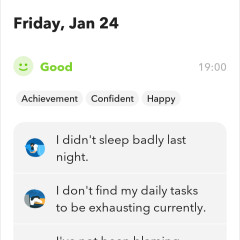 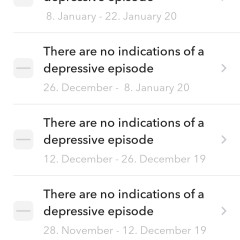 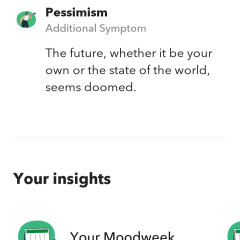 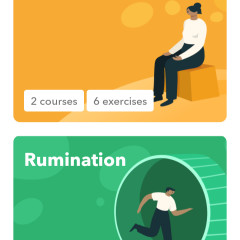 Living in a developed country, the biggest threats to my health are non-communicable illnesses, these develop if we smoke, drink, don’t eat properly, don’t get enough sleep, and if we don’t get enough exercise. The fourth app on this list, Google Fit, is sort of like the central hub for me when it comes to health because of its ability to link other applications, the main benefit of Google Fit, though, is its ability to track movement.

In developing Google Fit, the search giant teamed up with the World Health Organization (WHO) to provide information on weekly recommended activity levels. According to the WHO, we should be doing exercise (such as brisk walking) for at least 150 minutes a week; with more and more of us doing work from a desk the opportunity to keep active is diminished and requires us to get moving in our free time.

Google Fit tracks movement and awards you Move Minutes, which are added to your score whenever your phone is moving, and Heart Points when it detects brisk walking, cycling, or running. You can also add other activities and get the equivalent amount of Heart Points. Over the course of the week, you want to make sure that you’ve done enough to get your Heart Points to at least 150 which is the same as 150 minutes of exercise.

As I mentioned earlier, Google Fit can be synced with other applications, for example, you can link it to compatible heart rate apps or calorie counting apps and have them send data such as your heart rate or weight. Google Fit will save this data and allow you to track your progress which can be quite handy. 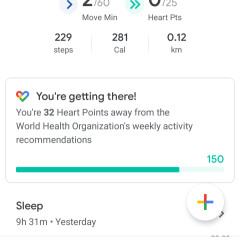 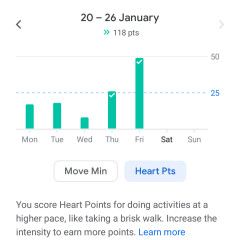 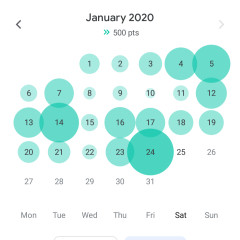 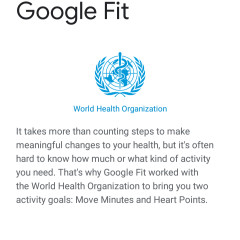 My final selection is an app called Ada, its core function is to ask you about your symptoms and suggest several illnesses that you may be suffering from. In the past you may have looked up online why you have a fever and a cough and been told that you’ve likely got some deadly disease typically found on the other side of the planet, there’s none of that guff with Ada.

Ada is an award-winning, GDPR-compliant, medical app with years of research under its belt and doctors, scientists, and industry pioneers steering its direction. While it should be stressed that results delivered by the app are not a diagnosis (you’ll have to visit an actual doctor for that), it will still give you some likely causes for your symptoms. Each illness will come with a note saying how quickly you should visit your doctor. For many illnesses, it will also give you information about associated risks, symptoms, how it’s diagnosed, treatment options, how to prevent the illness in the first place, and a prognosis. If you already know what’s wrong with you, you can head to the menu and open the Condition Library and find your illness to get information about it.

Over time as you try to work out what illness is causing your symptoms you may find you want to go back to your previous assessments, you can do this by heading to the Assessments section inside the app’s menu. Here, you’ll find a timeline with all the symptoms you’ve assessed before and you can dive in to find the cause and look up the relevant information. Additionally, the app will ask you if you’d like to track symptoms over time, you can find the history of these in the Symptom Tracking section found in the menu.

The last feature worth mentioning is profiles. While you’ll need an account to login, you can add additional people to your account, this is helpful if you need to figure out what’s wrong with someone who doesn’t have a phone or can’t get the app for some reason.

If you plan to use Ada, just keep in mind that it does not offer a diagnosis, can be wrong, and doesn't replace a visit to the doctor. 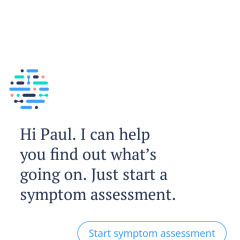 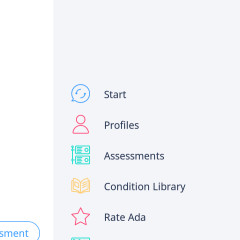 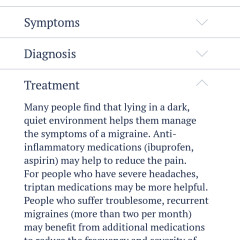 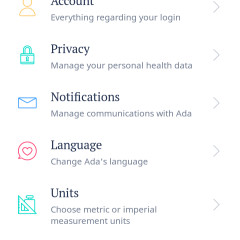 Hopefully, you’ve found some good recommendations here. These can make for a good core of health apps which you can further build around based on your situation. When looking to build your library of medical apps you should do a check on the developer’s website to see what privacy protections they offer if they handle data. It’s also best to see whether an app is endorsed by a medical body such as the World Health Organization, NHS, or similar. With endorsed apps, you’ll know that the information you’re receiving is legitimate.