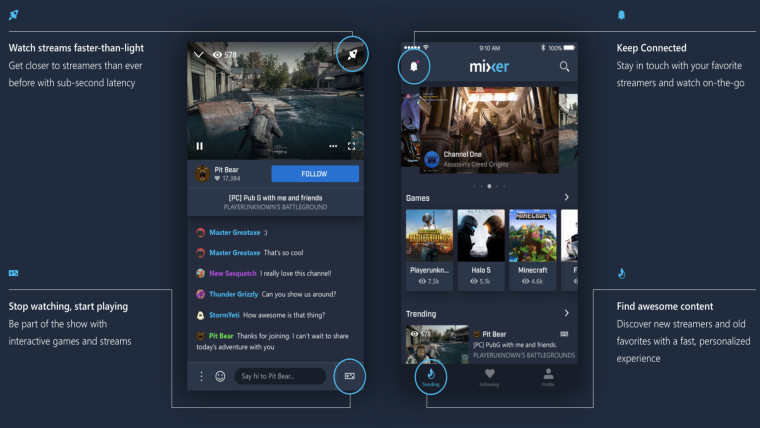 Microsoft's Mixer streaming service has revealed some of its development plans for the new year, including the addition of such things as subscribing to favorite channels in the Xbox One app and being able to tip content creators through the service instead of relying on third-party services.

One of the most requested features is channel subscription. While users could already do it on mobile and on the web, the functionality was lacking for the Xbox One. No other details were made available on timing, but more details are expected in the coming months.

Another feature planned is the ability for users to pay their favorite content creators directly through Mixer. While this still won't preclude the streamers from using their own third-party services, it is another value-add that fans and creators can expect down the road.

The service hasn't forgotten about its partners either:

For our Mixer Partners, we are investing in new ways for them to connect with their viewers and build successful communities on Mixer. As part of this, we’re excited to share that the Mixer Direct Purchase program is now in testing and will be launching broadly soon! With Mixer Direct Purchase, viewers can purchase digital games and game DLC directly through the Mixer streaming platform. When you’re watching a Mixer Partner playing a game or DLC that you want to own, you can purchase directly from the stream you’re watching. Mixer partners will earn a percentage from all purchases made through their stream, in turn helping them to continue to bring great content to their Mixer community. To start with, Mixer Direct Purchase will be available for all games in the Microsoft digital store, including more than 5,000 games across Xbox and Windows 10! Our aspiration is to make even more content available through Direct Purchase down the road.

Finally, technical improvements are planned for HypeZone, along with new "interactive capabilities" for streamers. More details are expected at the Game Developers Conference in March.