About a month ago, HP sent me two of its newest Chromebooks, the Chromebook 14 and the Chromebook x360 14 G1. While the names sound similar (I'm guessing it's a requirement to call it "Chromebook" if you're licensing Chrome OS), they're very different. The x360 14 G1 is a business device with high-end specs, while the Chromebook 14 is for consumers and the educational market, and it's much more budget-friendly.

It's also HP's first AMD-powered Chromebook, using an A4 processor (A6 is optional). That comes alongside of 4GB RAM, 32GB eMMC storage, and a 14-inch 1080p display that includes multitouch. This particular model costs $329.99, although it starts at $269.99 with an HD display.

The HP Chromebook 14 is made out of a polycarbonate material, although none of HP's materials are specific about that. It comes in three colors: Ink Blue, Snow White, and Chalkboard Gray, the former of which is what HP sent me. And I have to say that for a plastic laptop, it seems pretty slick.

It has a textured body, and it feels really solid. It's MIL-STD-810G tested, so it's durable, and it's IP41 rated, which means that it can deal with some spills. It's also 18.35mm thick, weighing in at 3.48 pounds, so it's pretty easy to carry around. It's not the lightest PC in the world, but it gets the job done.

It has a 180-degree hinge, which is meant to make it a bit more flexible. It also adds the ability to interact with the touchscreen in different ways than with a more standard hinge. 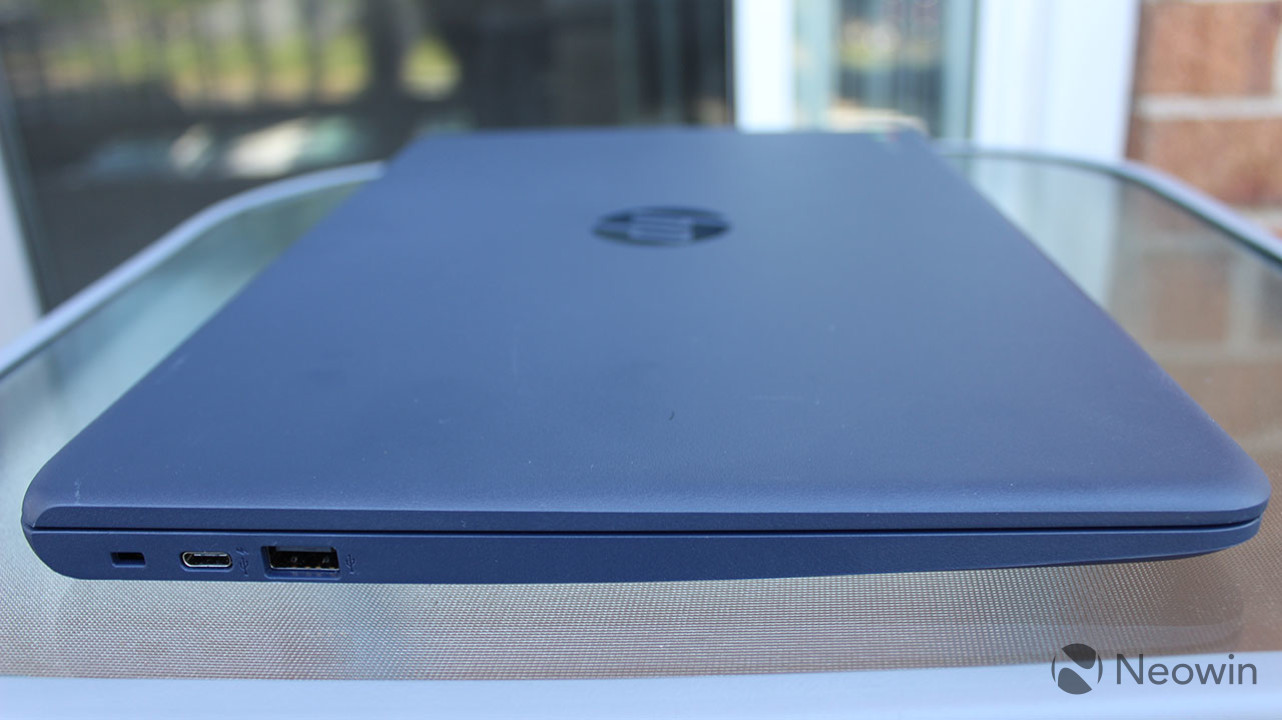 As far as ports go, you'll find a USB 3.1 Gen 1 Type-C port and a USB 2.0 Type-A port on each side. The nice thing about the placement of the two Type-C ports is that you can charge it from either side. Many laptops put both of them on one side, which always gets in the way sooner or later. The bad news is that both of the Type-A ports are USB 2.0, meaning that they get speeds of around 480Mbps, much slower than the 5Gbps USB 3.1 Gen 1 ports.

It's not a huge deal, since with a machine like this, you're probably not plugging in anything that needs more than that anyway. Still, USB 2.0 is just something that I'd prefer left in the past. 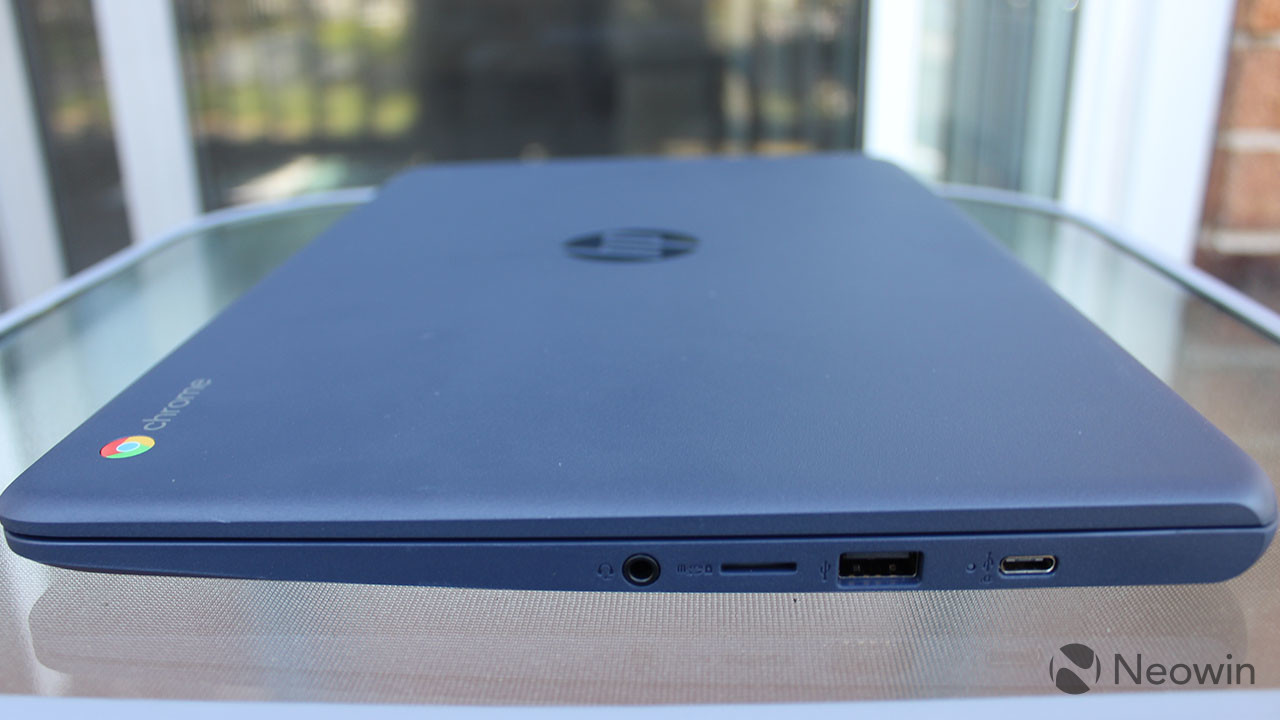 On the right side of the device, there's a slot for a microSD card and a 3.5mm combo audio jack. The addition of the microSD slot is nice, allowing for an extra avenue of external storage. 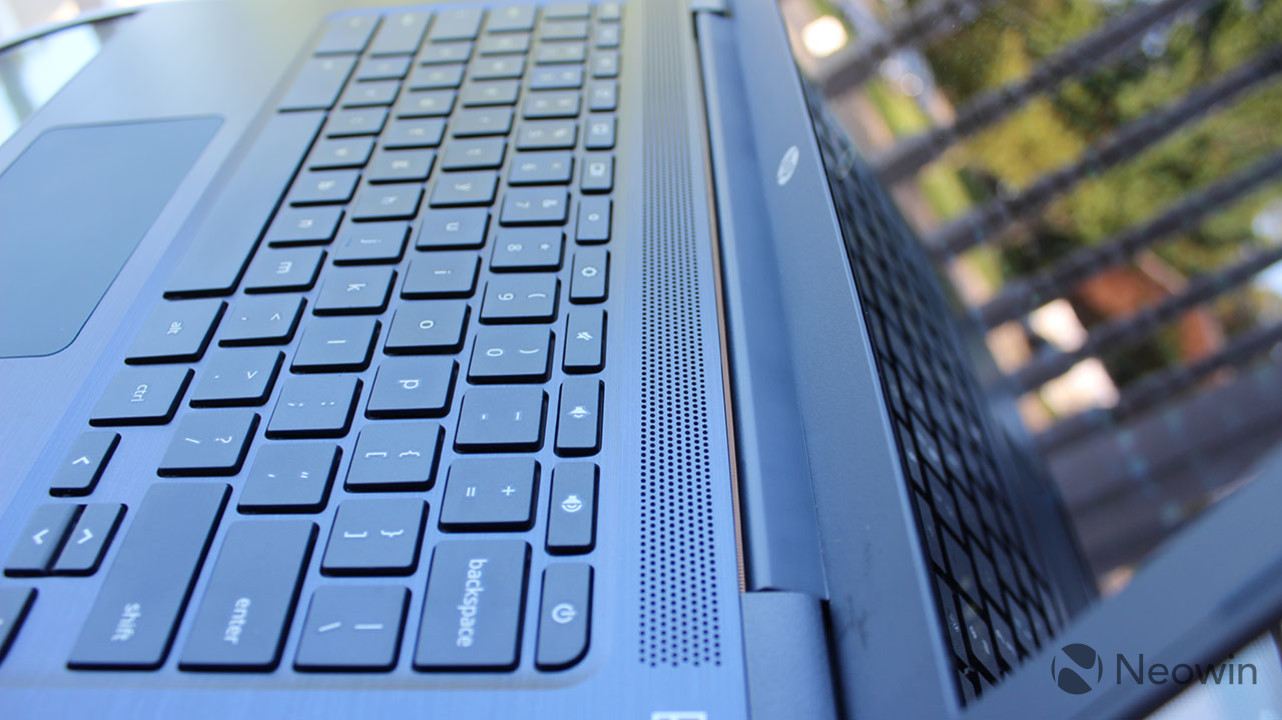 Moving to the inside of the device, the bezels around the display are a pretty standard size, something that you'd probably expect at this price point. Above the keyboard, there's a speaker bar with Bang & Olufsen speakers, and that's good news. The audio quality from this PC is pretty good, something that HP always seems to deliver through its B&O partnership.

The model that HP sent me includes a 14-inch 1080p touchscreen, although it's also offered in non-touch and touch HD. For a laptop that's priced at $329.99, the screen is pretty good. It doesn't have the 178-degree viewing angle that you'll find on premium devices, but the viewing angle is way better than any Windows PC that you'll find at this price point.

All of the screen configurations are 100% sRGB, so they have a good color gamut. It gets the job done, as it's not like you're going to be doing any high-end photo editing where you'd need the full Adobe RGB color gamut. 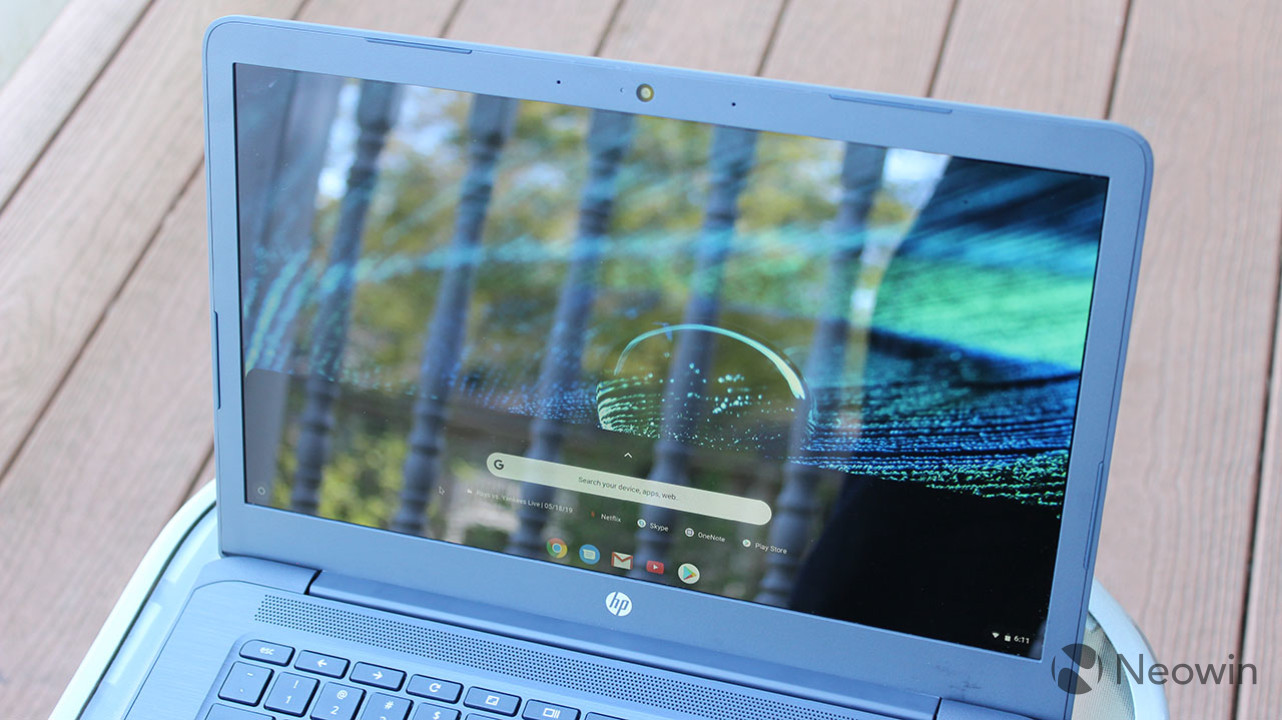 The screen is very glossy, and it's a bit hard to use outdoors. The image that you see above is taken with the screen at full brightness. Again, it's better than I'd expect given the price point, but it's disappointing that there's no anti-glare option.

The bezels on the sides are pretty standard, but once again, they're probably slimmer than other devices in the price range. The top and bottom bezels are a bit larger, fitting in a webcam at the top.

Also, I think that touch is a key feature these days, with Android app support on Chrome OS. A lot of the apps that you'll be using are built for touchscreens, so it's nice to be able to use it that way.

The keyboard is full-size with chiclet-style keys, and it's really nothing to get excited about. Like most other parts of this machine, it gets the job done, but it's not exactly top of the line.

For one thing, the keyboard is pretty noisy. It makes loud clacking sounds when you type, and I can only imagine a classroom full of these things. 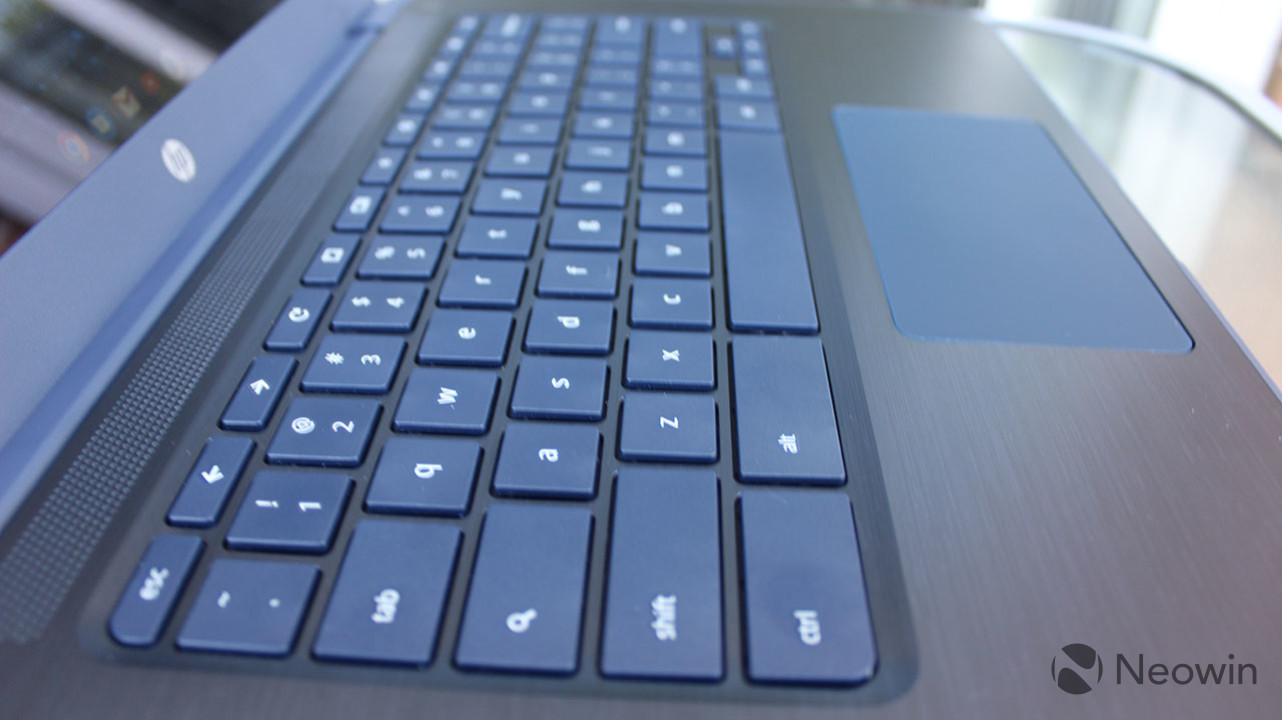 It's accurate though, and HP also offers a backlight as an option. My unit, unfortunately, does not have the backlit keyboard, so I was unable to test that out. It's also designed to be spill-resistant, which does make this better suited for students, although that's a common feature of Chromebooks for education.

Like all Chromebooks, it has the standard lowercase keys, something that takes a bit of getting used to if you're coming from Windows. Other differences include a search key instead of Caps Lock, no function keys, and if it's not obvious, no Windows key.

The clickable trackpad is actually quite nice. It's large, which is a really good thing, and I haven't had any problems with it. But again, I just really appreciate its large size, with HP maximizing the space on the deck below the keyboard.

Performance is where the HP Chromebook 14 really starts to suffer. It uses AMD's A4-9120C chipset, which includes Radeon R4 graphics. The dual-core APU was first announced at CES as AMD's first chips designed for Chrome OS. Alongside of that, you get 4GB DDR4-1866 SDRAM and 32GB eMMC storage.

In short, you get a mediocre dual-core chip, slow RAM, and slow storage. What this adds up to is a PC that's pretty bad at multitasking. If you're just browsing the web in Chrome, you're pretty good to go with a few tabs open.

On the other hand, if you have a dozen tabs open at a time and you're running Android apps at the same time, this probably isn't the machine for you. In fact, you might want to check out the Chromebook x360 14 G1, which is a much higher end unit. But that's what I tried to do. In my testing of the Chromebook 14, I ran it with my normal workflow. 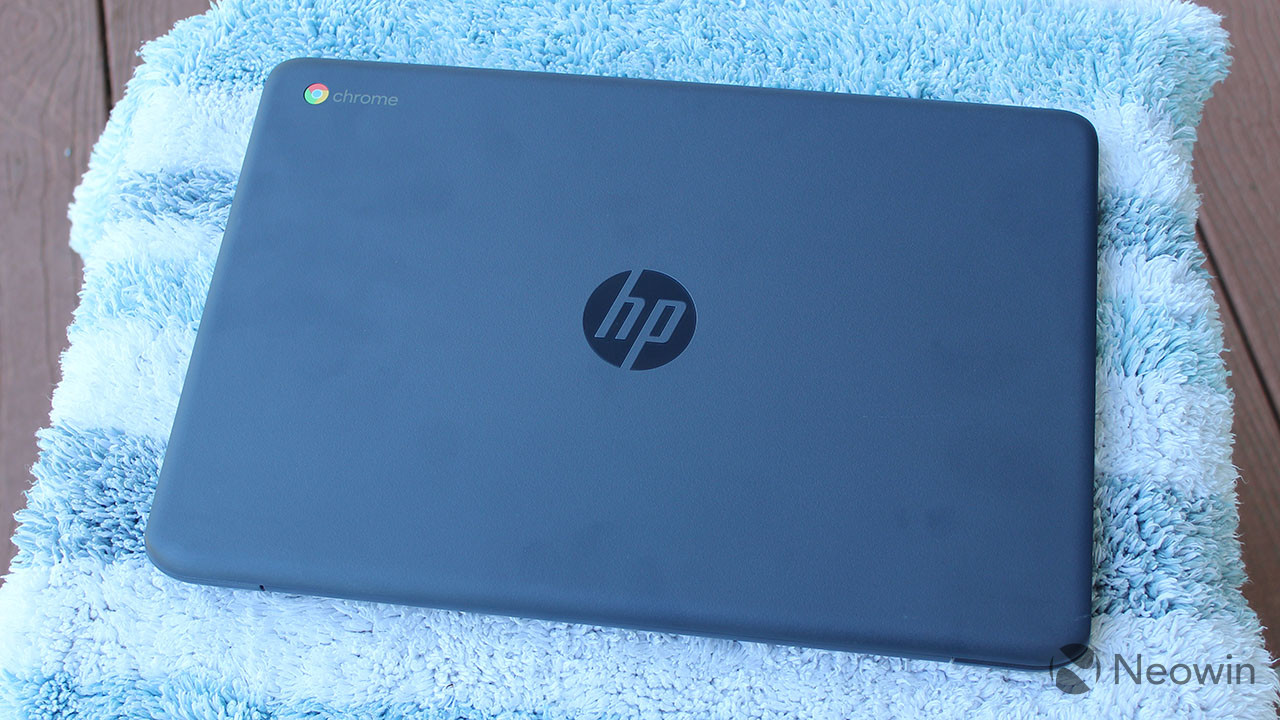 That includes using a bunch of tabs in Chrome, and then I ran separate Android apps like Skype, OneNote, Slack, Microsoft To-Do, and some others at the time. This machine choked up really quick, and performance was incredibly sluggish. The best way to boost performance in this situation was to use web apps wherever possible, something that was easy to do with most of the Android apps that I had open.

Battery life is great though, and what's interesting is that if you leave it powered on but asleep for a few days, the battery doesn't seem to drain, something that I've had trouble with on many HP laptops. When you wake it up, it takes little time to get right back to work, since Chrome OS doesn't take as long to wake as Windows does; it doesn't take nearly as long to boot either. 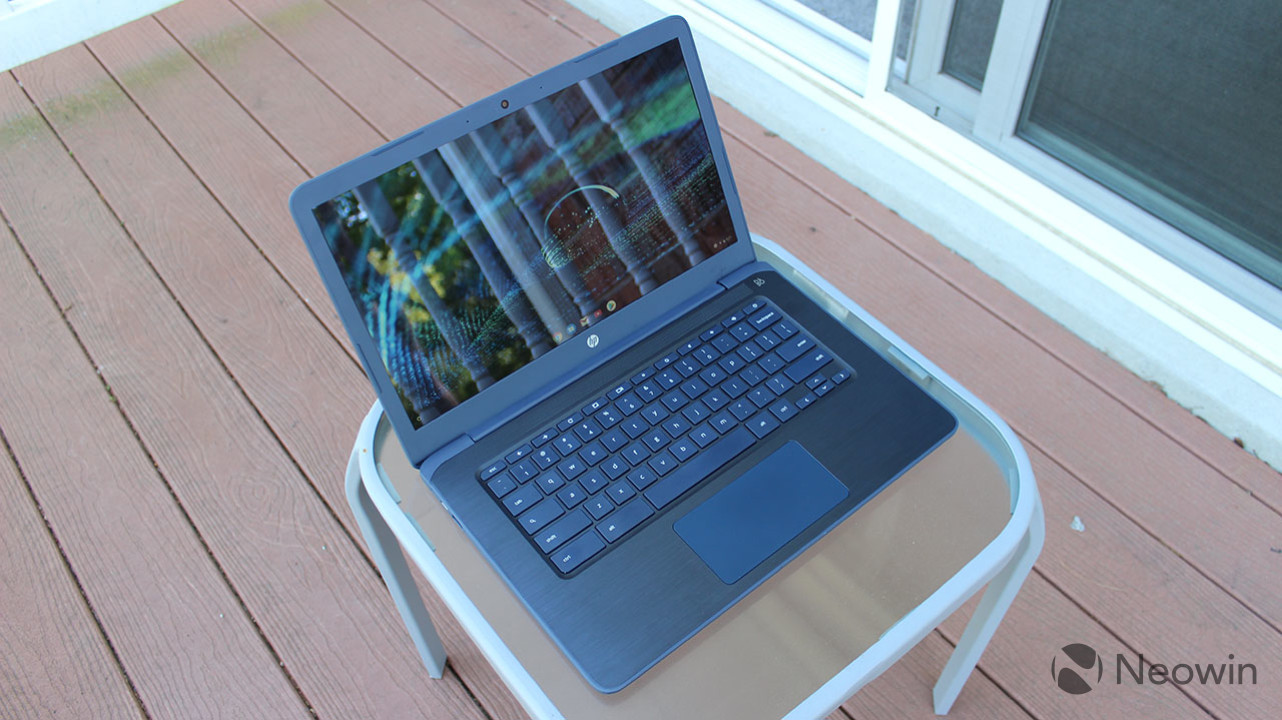 Installing updates is a breeze. You'll rarely have to restart, but when you do, you're back at the desktop within a few seconds.

I think that the main group of people that would appreciate a device like this are students at a younger age. If you're not trying to do a million things at once, it works pretty well. It can handle several tabs in Chrome, but probably only one Android app at a time before you'll notice significant lag.

As is the case with many devices around this price point, it's all about value. For $329.99, you're not expecting top-end performance and a bunch of bells and whistles. I do, however, wish that the performance was better. It was way too easy to get this PC to slow down to a snail's pace.

This is something that's good for K-6 students, before they get a bit older and start having to handle some heavier tasks. I wouldn't send someone off to college with it though, although it's possible that the model with the A6 processor brings a much-needed performance boost. 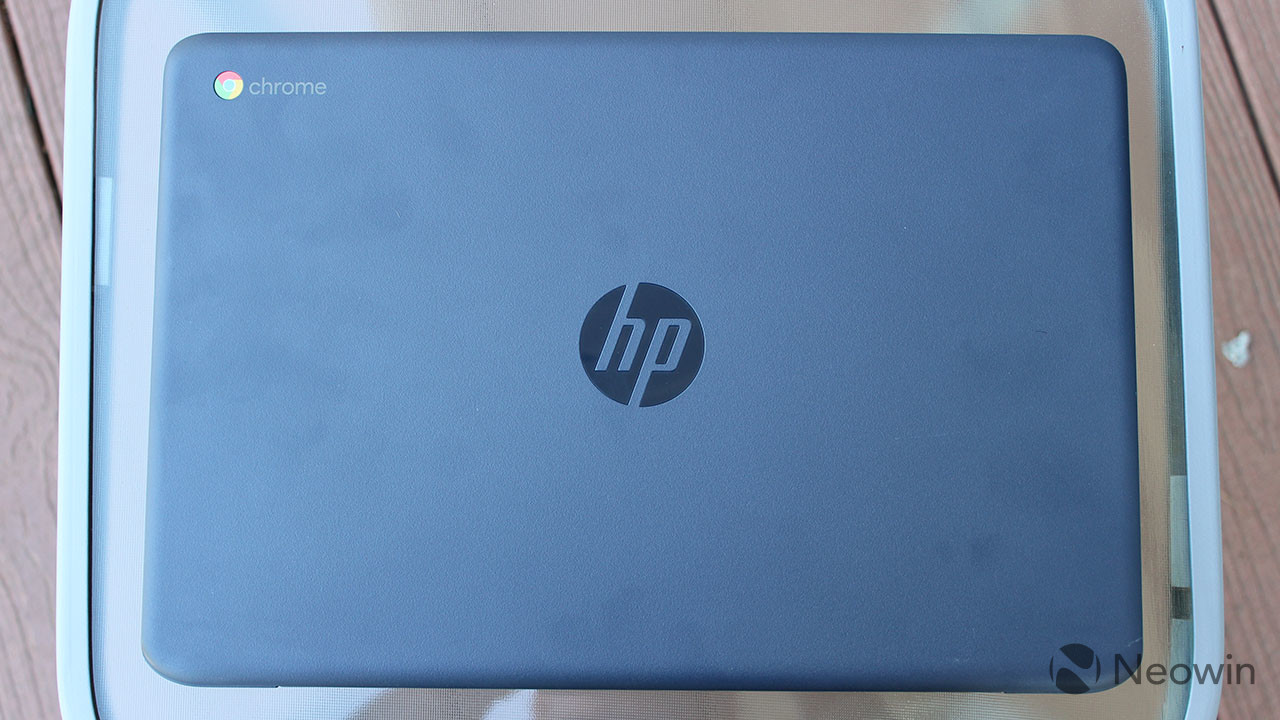 Make sure to check back soon for when I review the Chromebook x360 14 G1, which is a far more premium device. 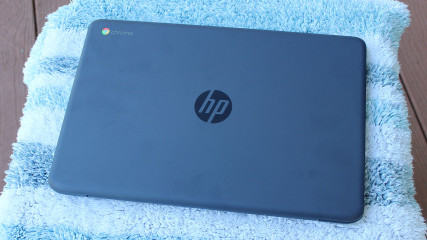 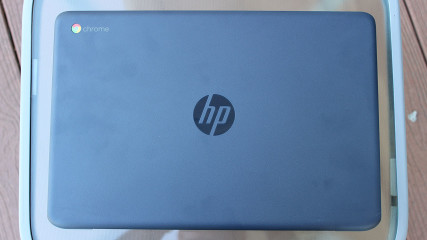 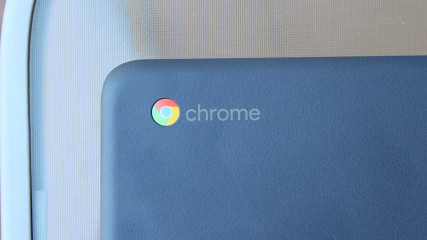 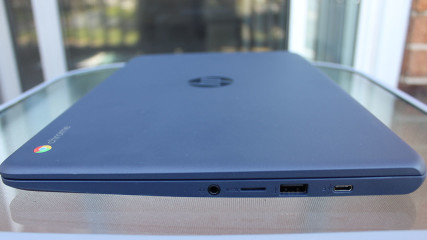 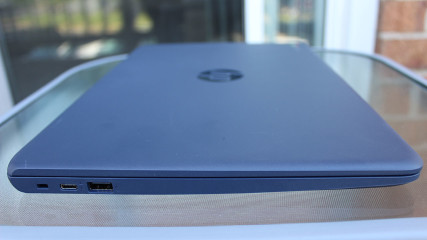 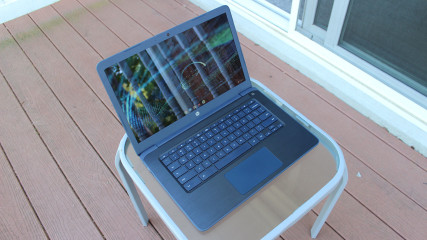 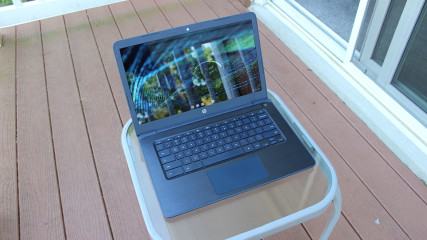 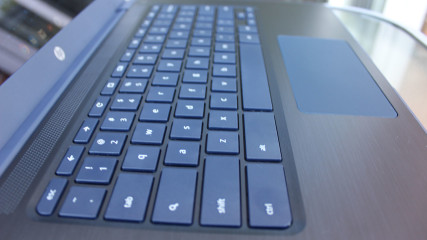 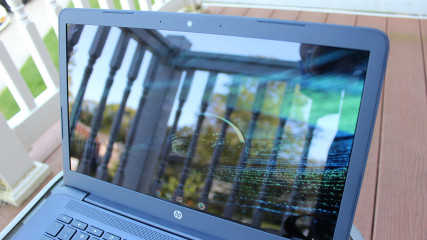 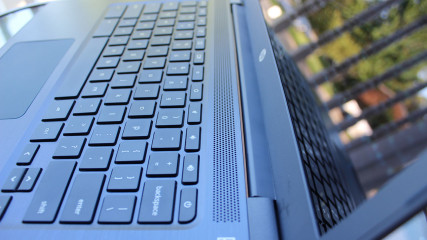 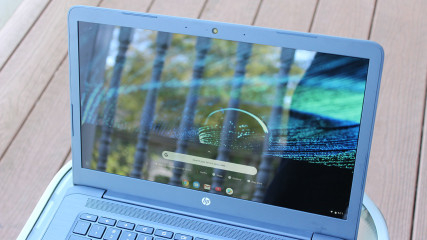 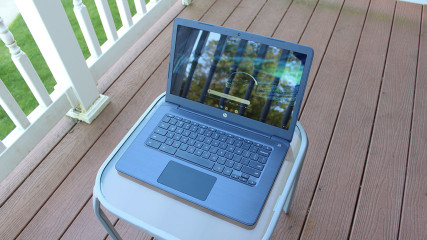