The long awaited Sprint 4G smartphone announcement has finally been made. At CTIA, Sprint unveiled its first 4G, WiMAX ready smartphone. Dubbed the HTC EVO 4G, this "superphone" can be used as a mobile hotspot for up to 8 devices, which is twice the number of connections that the Overdrive can handle. The device is set for release this summer. No exact date has been announced. To be alerted upon its arrival, visit Sprint's EVO 4G website and sign up.

The phone will pack a HD2 sized 4.3" screen and have HTC's FriendStream installed (for social networking), as well as Adobe Flash baked into the browser. Phone calls from the device will still be made over Sprint's CDMA network, while data runs over WiMAX and EV-DO Rev. A. This may finally allow a Sprint device to do both voice and data simultaneously. This was never before possible on a CDMA network.

The EVO 4G will automatically play YouTube videos in HD quality when the phone is in 4G coverage. The device can also output stunning HD video to an HDMI HDTV via its HDMI-out port. Its camera can capture 720p HD video and take 8 MP stills, making this phone the only multimedia device you need to carry. There's also a 1.3 MP front facing camera on the device, assumed to be for video chatting. Qik will even come preloaded so users can easily stream live video from either of the device's cameras.

Here are the known specs:

Below is a PR photo, as well as some hands-on videos from Engadget. 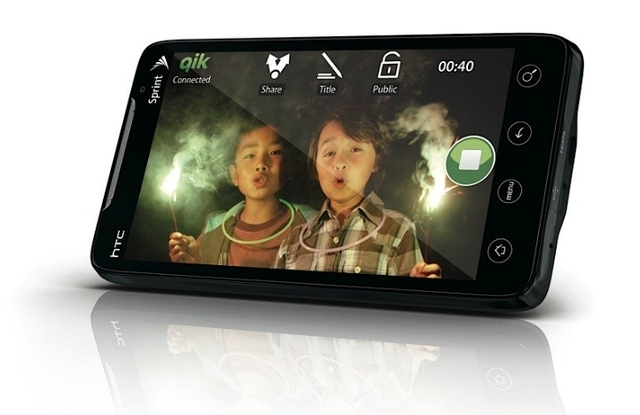