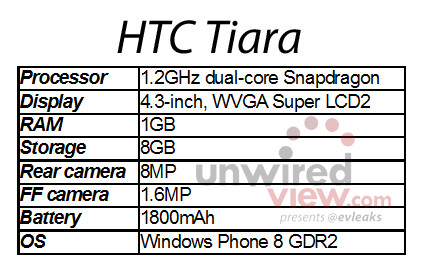 Earlier today we reported that HTC would be launching a Windows Phone device in 2013 and now we have quite a few more details about the upcoming device.

Unwiredview, who has been pouring out the information recently, has the goods on the new HTC device. The phone is referred to internally as Tiara and it will ship with Windows Phone 8.

As for specs, the phone will have a 1.2ghz Snapdragon CPU, 1GB of RAM, 8GB of storage, 8MP rear and 1.6 MP front facing camera and a 1800mAH battery. These specs would place this device into the mid-tier category, so don’t expect this phone to be a copy of the HTC One but the source believes it will look more like the One SV.

Thanks to our eagle eyed readers, it looks like this might be the device that is headed to Sprint. Sprint had previously stated that they would be selling a Windows Phone 8 device from HTC and the Tiara ticks both of those boxes.

The device is expected to land in mid-May.