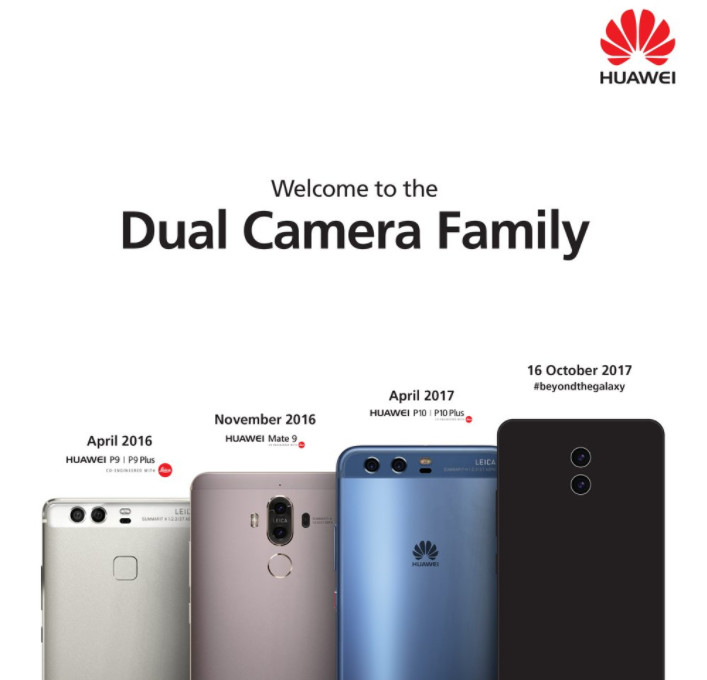 This week, Samsung announced its latest smartphone with the Galaxy Note8. While pre-orders for it opened a day ago, it looks like Huawei is busy building buzz for its upcoming Mate 10.

Through its HuaweiMobileAU Twitter handle, the firm has released a new promotional image, showing off some of its most important devices over the past two years. The timeline starts off with the P9 that was released in April of 2016 and ends with the more recent P10. Although the company doesn't give its upcoming handset a name in the image, it does state that it will be unveiled on October 16, which an invitation to an event has been sent out to media.

As for details, if the silhouette is accurate, it looks as though the device will be slimmer and taller than its predecessors, and will also come with a dual camera setup. The firm looks to be also having a bit of fun with the slogan "#beyondthegalaxy", which is a clear knock at Samsung and its Galaxy line.

Although there is still some time before the October 16 reveal, it looks like the coming months will be quite busy when it comes to releases with LG slated to show off the V30 at the end of the month, Apple potentially revealing its next iPhone in September, and Google's Pixels rumored to be arriving in October.