A post briefly appeared on the Building Windows 8 blog that outlined some of the new multiple monitor features that will be coming in Windows 8. We're not fully sure why the article is not available at the time of writing (at this link), but we luckily managed to pull a copy and tell you what's coming for multi-monitor users in Windows 8.

As is a common feature Microsoft has opened the article with some statistics on multi-monitor users in Windows. According to their data, 85.32% of desktop and 95.64% of laptop users use just one monitor, leaving 14.68% and 4.36% using at least two monitors respectively. Microsoft recognizes the benefits of using two or more monitors for multitasking and they will be bringing a number of cool features to Windows 8 that will enhance using multiple monitors.

For improved wallpaper support Microsoft is adding a few new features. Firstly, multi-monitor users will be able to select different desktop backgrounds for each of their monitors, and where needed and configured (for example with different monitor sizes/resolutions or even orientation) Windows will shuffle through images that it thinks are most suited to the monitor set-up. Also, you'll be able to set a specific option that spans wallpapers across multiple monitors for cool effects. 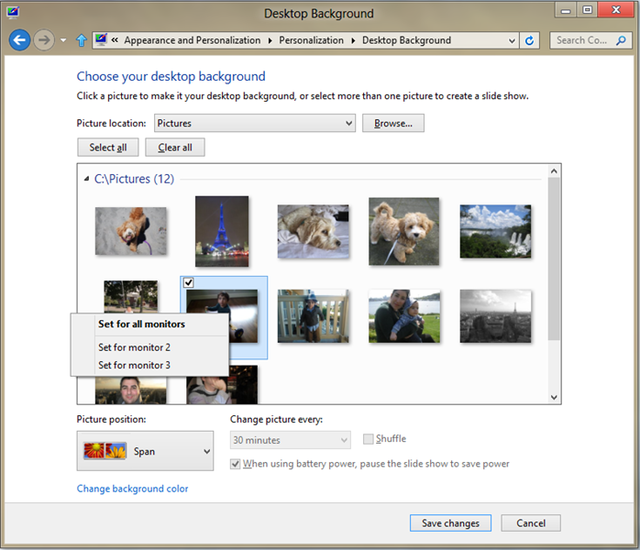 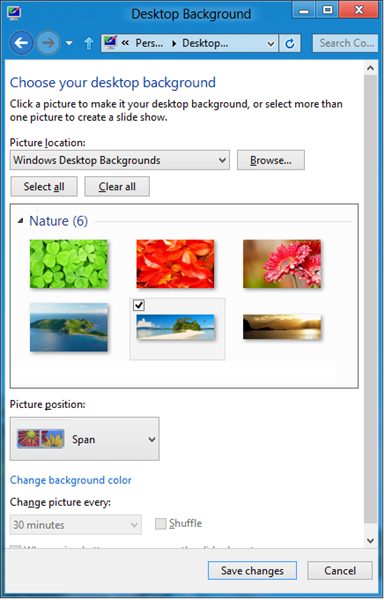 Normally these desktop background features have only been available with third-party software, so it's great to see that Microsoft are going to efforts to improve the out-of-box experience.

Another major improvement that is coming is the multi-monitor taskbar that many users have complained about the lack of in Windows 7. In Windows 8, users will have the option to show the taskbar on secondary monitors, and then there will be options to choose how the application icons are shown on these taskbars. By default the app buttons will be shown on both taskbars, but you can set it to show app buttons only on the taskbar belonging to the monitor where the application is open. 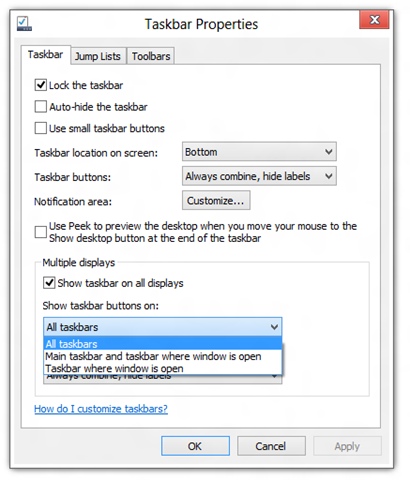 Again these features have been limited to third-party software in the past, but due to users heavily requesting them they will be present in Windows 8.

Microsoft has also been working on improving the way the Metro Start Screen and apps are displayed on multi-monitor set-ups, and starting with the Release Preview there will be new ways to display Metro items across two or more monitors. The Windows 8 team reports that while previously the Start screen and charms were only available on the one monitor, improvements will be made that will activate the gesture corners on all monitors.

This means that you will be able to show the Start screen and WinRT apps on whichever monitor you choose depending on what monitor you mouse to the bottom-left in. You'll also be able to bring up charms and the app switcher on any of your monitors, again depending on where you activate the gesture corners.

Finally Microsoft are improving the way the corners are activated, as with multiple monitors it can be extremely hard to get the corners to work without mousing to the next monitor. There will be a larger area that you can mouse to activate the Metro elements, and these will not interfere with moving between monitors.

The Windows 8 team close by saying how they have "lots of ideas for how [they] could do even more with Metro style apps on multiple monitors", including the possibility of multi-monitor APIs. While we wait for any more improvements, most of the features listed above will be coming with the Release Preview.