Reports about a Hulu Plus app showing up for Windows Phone users started coming up about a month ago, and now it has actually happened. The streaming TV show and movie service is now available for Windows Phone 8 devices via the Windows Store. 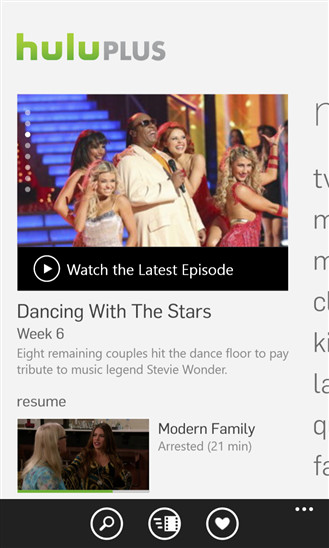 As with the previous mobile apps made for iOS, Android and Windows 8, the Windows Phone 8 Hulu Plus app (sorry, Windows Phone 7.x owners) allows people who have paid $7.99 a month for the Hulu Plus service to streaming the latest episodes of TV series from ABC, NBC, Fox and the CW onto their smartphone, along with a selection of older TV shows, a small selection of movies and a growing number of original and exclusive series.

The Windows Phone 8 version also support Live Tiles so users can see when their favorite shows have been updated. Hulu Plus subscribers can also stop watching a video on Windows Phone 8 and then resume on another device such as a Windows 8 tablet.

Just last week, Hulu announced that Hulu Plus now has over four million paid subscribers to its service. It also gets revenues by running ads inside TV shows, although the amount of commercials is not nearly as much as seen on broadcast or cable TV.